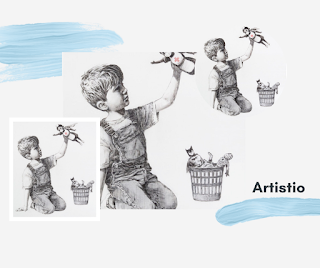 A Banksy painting depicting a young boy playing with a superhero nurse doll has raised more than £16m for an NHS charity after being sold at auction.

Game Changer, by the anonymous graffiti artist, appeared in a foyer at Southampton General Hospital during the first wave of the pandemic.

Including a buyer's premium, the purchaser paid £16.8m.

Christie's said it would be donating "a significant portion" of its premium, meaning a total of "more than £16m" would go to Southampton Hospitals Charity.

Banksy had previously said the £9.9m received for his piece Devolved Parliament, showing the House of Commons overrun with chimpanzees, was the highest ever paid for one of his paintings.

The artwork was delivered to the hospital in May with a note, which said: "Thanks for all you're doing. I hope this brightens the place up a bit, even if its only black and white."

It was hung near the emergency department and staff told the BBC at the time that it had helped boost morale.

A reproduction of the canvas will remain on display at the hospital.

Auctioneer Jussi Pylkkanen said Banksy's pledge to donate the proceeds to the NHS was "an incredible gesture" and described the sale as a "historic moment".

The image shows a young boy kneeling and playing with a nurse superhero doll, complete with cape, while Batman and Spider-Man lie discarded in a nearby bin.

Prior to the auction, Christie's said the artwork offered "an image of hope" and represented a "personal tribute to those who continue to turn the tide of the pandemic".