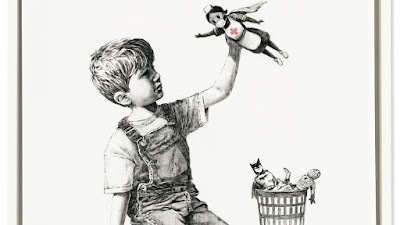 The painting, which mysteriously appeared at a hospital at the start of the pandemic, came with a tribute to frontline workers.

The painting, titled Game Changer, was delivered to Southampton Hospital during the first wave of the pandemic, with a note reading: "Thanks for all you're doing.

"I hope this brightens the place up a bit, even if it's only black and white."

And now, the anonymous graffiti artist is putting the original canvas up for sale, to raise funds for the NHS.

While Batman and Spiderman are discarded in a bin, the child clutches a figure of a masked nurse in a cape. A reproduction of the work will remain at the hospital.

Christie's said the art "offers hope" and represents a "personal tribute to those who continue to turn the tide on the pandemic."

Katharine Arnold, co-head of post-war and contemporary art in Europe at Christie's said: "At a time when we can dare to hope again and look at life beyond the pandemic it is important to reflect on the many symbols of strength and hope we have seen internationally since the beginning of 2020."

Banksy recently confirmed a painting of an inmate escaping from a former jail in Reading is also his work.

Game Changer will be on display in the window of Christie's headquarters in London, from 8 to 15 March.