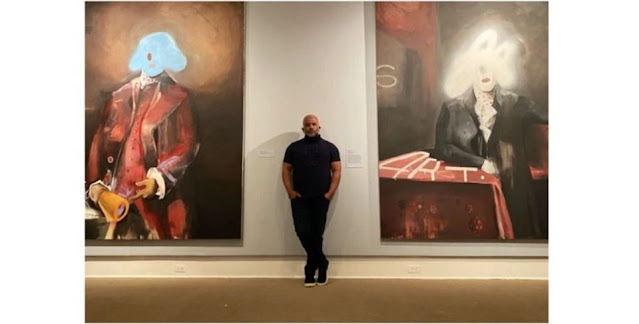 Any discussion of Marcus Jansen’s work would be invalid as long as there is no mention of his intense life journey, the circumstances that influenced the way he is experiencing the world, and the way he conveys his emotions and concerns into his art. Jansen’s childhood years in the Bronx and Queens (New York) in the 1970s were in stark contrast to his adolescent years in Monchengladbach, Germany, where he went to art school and was exposed to European culture and lifestyle. After serving eight years in the US military and getting a first-hand experience of some of the most devastating and crucial events of the 20th century, he went back to his genuine love for art and used it as a channel for his thoughts, worries, fears, and emotions. This complexity of influences directly impacts his creative output, which consists of compounded storytelling images constructed in an abstracted or surreal setting and filled in with familiar iconography. It’s the use of such iconography that functions as emotive anchors towards building an impassioned structure within which his paintings exist, speaking of themes of greed, war, surveillance, media culture, propaganda, and structures of power. By assembling his visuals from symbols that evoke certain emotions, the artist designs an ambiance that depends on the viewer’s focus, much like the real-life.

“My work is always meant to challenge the intellect in an anti-intellectual climate we are in today by composing awkward compositions like a puzzle suitable for anyone viewing it from their life lens but forcing them to engage critically,” the artist explains the way his imagery is constructed. Such an experience is further accentuated by the masterful use of paint qualities and suggestive details that add to the storyline a sense of time passing by. Whether it’s simple tally marks on a wall, a ladder protruding over a barrier, or a runny egg, the images often go beyond freezing a moment and are instead telling a larger story using the vocabulary of painting. − Sasha Bogojev