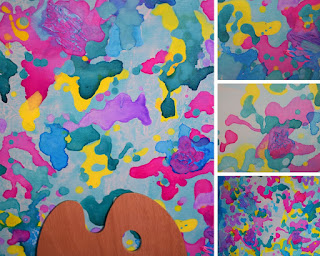 2020 art market reports say it all—generally speaking, sales are up, millennials are participating more and more in major acquisitions at auction, and eyes are on Africa for fresh new voices.

Figuration provides a window into other people’s stories; abstraction reflects the contours of our own. Even though the highest selling items of 2019 contained figures at Christie’s and Sotheby’s, there are signs that tides are changing. Artsy released a list of 11 emerging artists defining abstraction, solo shows by artists like Hae Won Sohn, Julio Rondo, and Dean Erdmann have all enjoyed excellent press, and group exhibitions like

Let’s take a look at these affordable artists who are taking abstraction in a new direction. 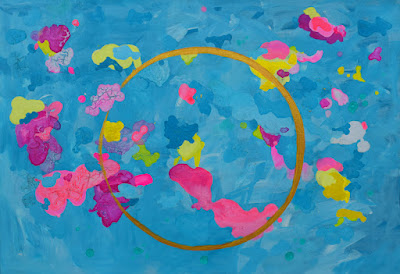 Romilio’s playful, buoyant acrylics bound between references to minimalism and pop art in the same breath as eerie biomorphism, resulting in an unmatched vibrance and liquidity.

The artist’s work has been included in numerous group exhibitions, in New York and Paris. In 2020, he gained many nominations at International Film Awards (Venice Film Awards, Florence and Sweden Film Awards) and received two awards for his second short film “Above the borders” at CYIIF.

His paintings art available at TateMoma.

Eric Brown (b. New York, NY, 1967) received a BA in studio art from Vassar College. His work has been reviewed in Artnews, artcritical, Hyperallergic, and The New Criterion. Brown was a visiting artist and scholar at the American Academy in Rome in 2015 and a recipient of a MacDowell Colony Fellowship in 2016. An exhibition of the artist’s work was presented in 2015 at the Palmer Gallery at Vassar College. His work was the subject of a solo exhibition at Crush Curatorial Chelsea in 2016. The artist’s work has been included in numerous group exhibitions, most recently at Lennon Weinberg Gallery, Geoffrey Young Gallery, and Galerie Jean Fournier in Paris. Owner of Tibor de Nagy Gallery (1994-2017), he is currently an art advisor and curator. He expects to receive a Master of Divinity from Union Theological Seminary in June 2020.

Gilliam is well into his ‘80s and experiencing an unparalleled resurgence over the last decade. His drape paintings are considered a major step in the development of contemporary art, but, due to his race, his work was woefully under-appreciated until a 2005 retrospective at the now defunct Corcoran Gallery of Art in Washington, DC. His work has been collected by the Museum of Modern Art in New York, the Musee d’Art Moderne de la Ville de Paris, and the Tate Modern in London, among others.

Hailing from the Aichi prefecture, Japanese artist Motoyama deconstructs and rescontructs the foundational elements of painting to form her own vocabulary of meta-motifs. Her acrylic inversions simultaneously remix and reinscribe our preconceived notions of abstract gesture. Recent exhibitions include solo turns at Volvo Studio Aoyama, Tokyo, Yutaka Kikutake Gallery, and the Oyama City Kurumaya Museum of Art.

Chinese-American artist Diao has spent his career riffing on famous Modernist paintings, simultaneously beatifying and undermining the movement’s Eurocentric legacy. His work features in the collections of institutions like the Museum of Modern Art and has been included in the Whitney Biennial, MoMA PS1, and Museo Tamayo.

Ethier’s flamboyant, modular abstractions fuse pop and formal traditions together in dizzying, psychedelic breaches of color. Recent solo exhibitions have included features at LMAKgallery and Nancy Margolis in New York, NY, and his work has been featured at MINUS Space in Brooklyn, Geoffrey Young Gallery in Great Barrington, MA, and Bernaducci Meisel Gallery in New York, NY.

Meyer’s calligraphic abstract paintings fuse line and form with seamless, meandering elegance. Mentored by Helen Frankethaler at New York University, Meyer has been exploring the linear infinity of the picture plane for over thirty years, during which time her work has been collected by the Museum of Modern Art in New York, the National Gallery of Art in Washington, D.C., and the Brooklyn Museum, among other prestigious institutions.