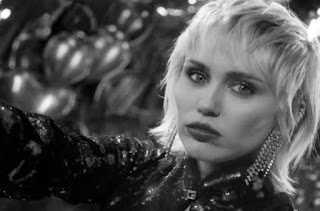 It’s the dead of night (well, depending on your time zone, it is), the perfect hour for a “Midnight Sky.” Miley Cyrus just dropped a new remix of her recent track tonight, featuring Stevie Nicks by way of Nicks’s own eternal 1981 bop “Edge of Seventeen,” which the remix not so much heavily samples, as joins forces with.

Given the similarities between the songs, Cyrus had, in fact, reached out to the Fleetwood Mac singer to get her okay before its release. “I actually had this song blessed by Stevie Nicks, because there is a kind of a nod to ‘Edge of Seventeen’ in this song,” she explained on the Zach Sang Show in August, as Harper’s Bazaar points out. “So, I actually reached out to her directly about, ‘this song, it has your spirit, your magic.’ I actually wrote this whole kind of message about, you know, ‘the kind of artist I want to be is the kind of artist that you’ve been for me, like I just hope that I can be that for other people.’ When I’ve felt lonely, Stevie Nicks has been there for me, whether she’s known it or not.”