Cardi B calls off her divorce! Rapper officially files to dismiss separation from Offset... less than two months after branding marriage 'irretrievably broken' 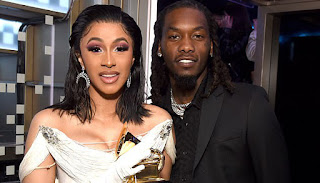 Cardi B has officially filed to call off divorce from fellow rapper husband Offset less than two months after branding their marriage 'irretrievably broken.'

The 28-year-old rapper filed documents in Georgia to dismiss the divorce that she had set in motion back in September according to a Monday report from TMZ.

This is not the first time she has changed her mind about a legal split from the 28-year-old Migos rapper as they broke up in December 2018 amid infidelity rumors only to make a public appearance together just two months later.

Cardi is seemingly still leaving the door open for a potential split as she filed the dismissal 'without prejudice' which means she has the right to refile the divorce at a later date according to the publication.