Conquest of the Irrational. Books illustrated by Salvador Dali from the Collections of Mark and Pavel Bashmakov 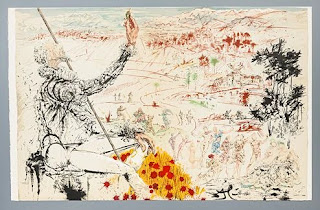 Salvador Dali’s first major work in the realm of the book – a cycle of illustrations for the Comte de Lautrémont’s prose poem Les Chants de Maldoror – came out in 1934. Alongside Max Ernst’s “novels in collages”, that publication became one of Surrealism’s foremost illustrated books. Nevertheless, for a long time this remained an isolated instance in Dali’s oeuvre: in the 1930s he as a rule restricted himself to creating individual prints for the books of his friends (André Breton, Paul Eluard, René Char, René Crevel). The artist’s next large series of illustrations would appear only ten years later.

The peak of Dali’s activities as an illustrator came in the second half of the 20th century. By that time, the artist’s own efforts had turned his name into a popular brand, so publishers were regularly commissioning him to produce engravings, lithographs or drawings. Dali illustrated dozens of books. He readily tackled any project, even the most ambitious, finding inspiration in the broadest range of texts – from the Bible to the poetry of Chairman Mao. In contrast to his former Surrealist comrades, he happily turned his hand to the classics of world literature (Ovid, Dante, Ronsard, Goethe, Shakespeare, Milton), as if showing that he considered himself the equal of the great poets of the past and that he himself intended to become a modern classic.

Dali was accustomed to playing to his audience. Even the intimate form of book art turns at times under his hand into a glaring piece of showmanship. The design of the publications reflects his taste for bold striking gestures: elaborate multicoloured printing, expensive materials, gold-embossed cases or covers, sumptuous leather bindings, on occasion a huge format typical not of book art, but of advertising posters.

Many of Dali’s works in the realm of the book can be viewed as illustrations in the traditional sense of the word, acknowledging the plots and characters of a literary work. In this artist’s interpretation, though, practically any subject turns into a Daliesque spectacle. It is no coincidence that the word dalinisé – “Dalinized” – was coined. Like a conqueror asserting his authority in a defeated country, Dali populated an author’s world with his own figurative motifs. Egocentric in life and in art, he viewed a text through the prism of his own personal mythology. For example, in the illustrations for the Divine Comedy, Hell is full of quotations from his paintings of the 1930s, while Heaven references the works of the early 1950s: the account of Dante’s journey “chimes” with the account of Dali’s own path from the early Surrealist imagery to “Nuclear Mysticism” and the passion for classic art.