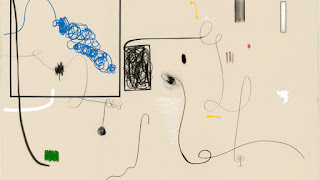 Christian Rosa is a Brazilian-born contemporary painter. Rosa’s improvisational marks—made using pencil, spray paint, and oil paint—are applied to unprimed canvas in isolated patches of color to create lyrical semi-abstract narratives with such playful titles as God Hope Coke Broke, This is Barely Noble, and Tales of a Slippery Hot Dog. Indebted to the works of both Cy Twombly and Joan Miró, Rosa’s works are completed in a primary color palette with long pencil marks flitting around the painted space. In his works made after 2016, the artist has painted the full area of canvas, which appear as though details of his earlier works have been captured in close up.
Born on September 12, 1982 in Rio de Janeiro, Brazil, Rosa was raised in Vienna, Austria. The artist worked in photography and film before painting, and went on to study under German painter Daniel Richter at the Academy of Fine Arts Vienna. Rosa has exhibited at White Cube’s booth at Frieze New York, Saatchi Gallery in London, the Athens Biennale, and his work has been collected by Leonardo DiCaprio and Jay-Z. The artist lives and works between Los Angeles, CA and Vienna, Austria.
Labels: abstract art abstract painting art