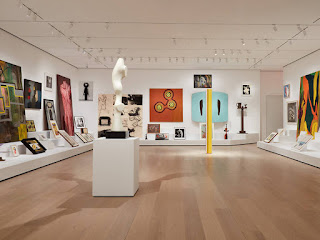 As a painter, I’ve always had an eye for shapes. Shape defines every outline, mass, and negative space. And everyone has a personal shape: namely, a shadow, that strange, flat, constantly shifting form that goes wherever you go, attached to both body and psyche. But even though shape is everywhere, we don’t talk about it much; it’s not a hot topic in art, like color or systems. I wonder if, in fact, shape got left behind when modern art turned to systems, series, grids, and all things calculable in the 20th century. Was shape too personal, too subjective, to be considered rigorously modern? Or is it just too indefinite, too big, to systematize?
I had these questions in mind as I curated this Artist’s Choice exhibition, and I decided to look for works in MoMA’s collection in which shape does prevail over considerations. I found a wealth of artworks, far too many to include here, by artists who dig into life’s surfaces, who start with physical perception rather than abstract logic. Often eccentric, poetic, or intimate, these works are like bodies that speak, operating at the hub of language and matter, signs and sensations.
During my search, I realized that shape-makers were also often outliers in modern art. Some of these artists were overlooked, or out of sync with their time. Perhaps this is because shape-artists tend to work with uncertainty and vulnerability instead of the self-assurance and dependability of systems. Doubling back to look at them now, in different configurations, can reopen old questions. We see how these artists explore the frailty of bodies, their marginalization, but also their revision and repair—making plain the political realities of having a body to begin with. They proceed by marking what we imagine to be the self, which like the shadow is a force both new and ancient.
—Amy Sillman (American, born 1955)
Organized by Amy Sillman with Michelle Kuo, The Marlene Hess Curator, and Jenny Harris, Curatorial Assistant, Department of Painting and Sculpture.
Labels: art art in new york new york art newyork