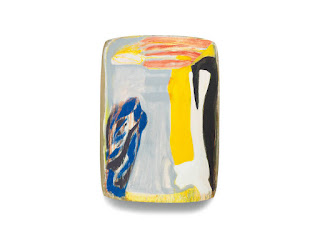 Cheim & Read, Chelsea
Until Nov 15 2019
Now 89, Gorchov has spent his career pursuing the same formula of limning simple, biomorphic shapes (often in pairs) against contrasting backgrounds of thinly applied pigment. But the most distinctive aspect of his paintings is their configuration: Instead of using a rectilinear canvas, Gorchov employs linen stretched over a saddle-shaped frame. The results resemble ancient shields, especially when Gorchov’s abstract forms are set in mirror symmetry like the coat of arms of some warring house. Lyrical and painterly, Gorchov’s style departed from the hard edge aesthetics typical of shaped-canvas paintings during the 1960s, and in that respect, his approach wound up having a considerable impact on the emerging Neo-Expressionist painters of the Reagan era. The height of that influence is recalled here in a survey of works created between 1979 and 1983.