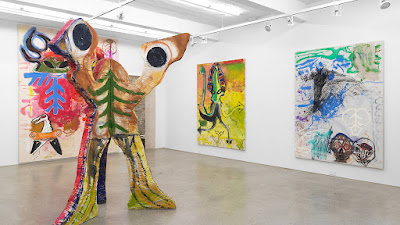 Until Wednesday October 23 2019
Magenta Plains presents Neptune’s Machine, Bill Saylor’s second exhibition at the gallery consisting of new paintings and large-scale sculpture. Saylor’s approach to topics of natural history, marine biology, and ecological crisis along with a freedom of materiality galvanize his distinct painting style.
The title is a nod to the mythology of a collective past, while acknowledging a very real phenomenon: oceans are the planet’s main regulatory system. Currents contribute and alter jet streams, drive weather patterns, stabilize temperatures and guide wildlife. Often those trajectories are as erratic and reckless as the deities’ mercurial temperament. The metaphor of Neptune’s Machine captures the raw energy and natural force of Saylor’s hand and allows for a broad representation of his explorations.
Built up with layers of splattered and poured paint, parts of Saylor’s canvases resemble chemical spills—motifs of environmental damage propelled by a frenetic and muscular application of paint smeared and scratched. Notational devices appear on canvases as abstracted weather maps. Their features, symbols, and contours delineate compositions that are scattered with both real and hybrid figures, evincing an ever-present drawing practice in which his work is rooted.
http://magentaplains.com/