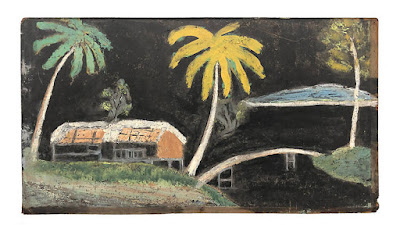 Darling (1894-1973) was an otherwise ordinary man with an admittedly restless resume: Commercial fisherman, Hollywood stuntman, chiropractor and oil-industry engineer. He retired at age 65, following the death of his wife, and to escape his grief and loneliness, he embarked on two sojourns through Europe and the Far East, including journeys via tramp steamer to Japan, the Philippines and the islands of the South Pacific. When he finally returned home from his adventures, he began to furiously paint his recollections of the places he’d visited, even though he’d never picked up a brush before. These images soon filled all the wall space in his house from top to bottom, necessitating him to use furniture and other household objects to paint on. The result, an obsessive art environment called House of a Thousand Paintings, is one of the more remarkable feats of Outsider Art, as this selection of Darling’s work shows.
Venue name: Shrine
VENUE Address: 179 E Broadway New York City 10002
Cross street: between Jefferson and Rutgers Sts
Opening hours: Wed–Sun noon–6pm