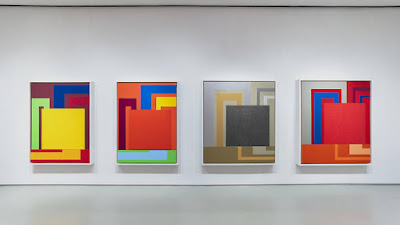 The 1980s saw a revival of Pop Art and Minimalist aesthetics under the rubric, “Neo-Geo,” which quickly produced art-stars such as Peter Halley, whose fluorescent-colored, “cell-and-conduit” abstractions repurposed circuit-board diagrams to evoke the dawning information age. But like a lot of art that produces more heat than light, Halley’s efforts fell out of favor with stateside collectors by the end of the Reagan era, compelling him to rely on the kindness of European admirers during the ensuing decade. Among them was the Italian dealer Gian Enzo Sperone, whose personal cache of Halley’s compositions makes up this show—one of several over the past year or so that have marked a resurgence of interest in the artist’s work.
Venue name: Sperone Westwater
VENUE Address: 257 Bowery
New York 10002
Cross street: Between E Houston and Stanton St
Opening hours: Tue–Sat 10am–6pm
Transport: Subway: F to Lower East Side–Second Ave