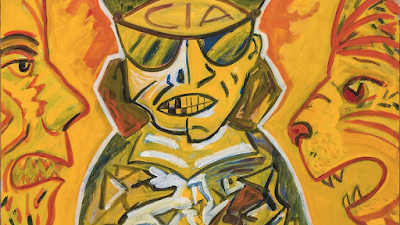 These days, revivals of forgotten artistic careers are a dime a dozen, but this two-space re-introduction to Hak Vogrin (1920–2009) reveals a rather eccentric figure who spent a half-century on the margins by his own accord. A self-styled hardcore vegan, street-smart punk and early male feminist, Vogrin was already a bit long in the tooth when he emerged as part of the late-’60s East Village scene—though emerged is perhaps the wrong word for an artist who deliberately rejected the art world in favor of laboring in obscurity. Of course, it’s an open question whether his rage-against-the-machine brand of Neo-Expressionist painting would have appealed to collectors anyway, but as seen in these shows, the authentic, uncompromising quality of his work stands in sharp contrast to the market-tailored provocations of today.
Venue name: Shrine
Address: 179 E Broadway New York City 10002
Cross street: between Jefferson and Rutgers Sts