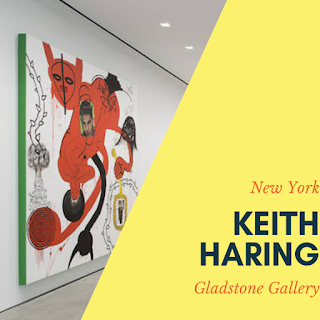 Gladstone Gallery is pleased to present an exhibition of paintings by Keith Haring. The show includes canvases and tarps painted in the 1980s, which feature the iconic imagery and motifs that Haring developed earlier in that decade. Having first gained recognition for his public work, much of which was done subversively in the New York City subway system, Haring continued throughout his career to develop a populist aesthetic. The works on view are characteristic of Haring’s artistic practice, featuring a bold, bright color palette, exuberant figures, and a thoughtful use of unconventional materials.
Though Haring created many works that initially appear to be celebratory and playful, he was a politically active and socially conscious artist, interested in reflecting and responding to the cultural climate in which he lived. Accordingly, his works frequently explore themes of sexuality, technology, the AIDS virus, and capitalist greed. This juxtaposition between aesthetic and subject matter is most readily apparent in his 1986 work Untitled. Painted in vibrant red and yellow, the work depicts his classic, simply outlined human figures; but unlike many of his other works in which the figures are dancing and bursting with energy, here they lie piled atop one another, with symbolic black x’s over their faces, a haunting representation of the toll taken by the AIDS virus.