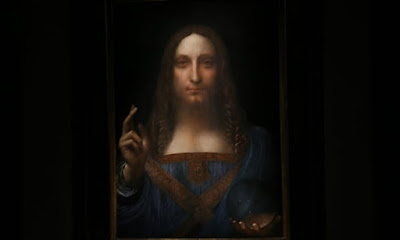 Months after the painting Salvator Mundi sold for a record-breaking $450m (£335m), a leading Oxford art historian is challenging its attribution to Leonardo da Vinci.
Matthew Landrus, a Leonardo scholar, believes most of the painting is by the artist’s studio assistant Bernardino Luini, whose own work generally sell for less than £1m.
“This is a Luini painting,” Landrus said. “By looking at the various versions of Leonardo’s students’ works, one can see that Luini paints just like that work you see in the Salvator Mundi.”
The picture, which portrays Jesus gesturing in blessing with his right hand while holding a crystal orb in his left hand, was sold last November by Christie’s New York as “one of fewer than 20 known paintings by Leonardo”.
Acquired for the Abu Dhabi Department of Culture and Tourism, it will be unveiled in September at the Louvre Abu Dhabi before its inclusion in a Leonardo exhibition at the Louvre in Paris next year.
Some of the world’s foremost experts confirmed the Leonardo attribution in 2011, when Luke Syson, the then National Gallery curator, included the painting ina Leonardo retrospective at the London gallery that year.
But other leading experts have their doubts. Frank Zöllner, a German art historian at the University of Leipzig, believes the Salvator Mundi could be a “high-quality product of Leonardo’s workshop” or even a later follower, and Charles Hope, the Italian Renaissance specialist, has argued that accepted Leonardo paintings look “quite different”.
Michael Daley, the director of ArtWatch UK, criticised the painting for its lack of Leonardo’s “greater naturalism and complexity of posture”, and said Landrus’s theory was “very interesting”.
The book is a substantial update of his 2006 publication, which has sold about 200,000 copies in 15 languages. The Salvator Mundi had not yet surfaced then as a Leonardo
Describing Luini as one of Leonardo’s two most talented studio assistants (the other was Giovanni Antonio Boltraffio), he has compared Luini’s Christ among the Doctors in the National Gallery with the Salvator Mundi.
Landus highlighted stylistic similarities, including the depiction of the gold bands and the fabric on the robes, saying: “One sees a similar construction on both of those gold bands and on the way the drapery is done. Luini did other paintings that had very good gold tracery in them. Also Christ’s face in both paintings has very similar modelling and, while the hairstyles are slightly different, the approaches are quite similar. Also, the shoulders on Christ are very similar.”
Pointing to a photograph of the Salvator Mundi before its extensive restoration, he said: “There’s a lot of missing paint in certain sections. So it really does add to the discussion about how overpainted it is.”


The Salvator Mundi was in fact attributed to Luini in 1900, when it was acquired by Sir Charles Robinson for the Cook collection. Landrus said: “It’s more accurate than just calling it a Leonardo.”
Labels: art painting