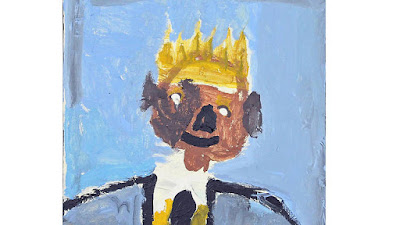 Until Sunday September 9 2018
Left with a permanent brain injury after being hit by a car as a child, Billy White has been working at the NIAD Center for Art & Disabilities In Richmond CA since 1994. Since then, he’s produced a prodigious body of paintings, sculptures and drawings characterized by vivid colors and loose, spontaneous handling of materials. Drawing on pop-cultural subjects that have included Jed Clampett (of Beverly Hillbillies fame) and professional wrestler Hulk Hogan, White has been particularly drawn to rendering portraits that combine Expressionism with humor. But like all self-taught artists, White works in a manner that is ultimately indefinable creating a vision of a private world that seems accessible and inaccessible at the same time. This show takes its title from the 1988 movie starring Eddie Murphy as an African prince who arrives in Queens, NY in search of a bride, and takes a job at a fast-food joint as a disguise. The film’s theme of immigrant striving seems especially relevant in the current political climate.
Venue name: Shrine
Address: 179 E Broadway New York City 10002
Cross street: between Jefferson and Rutgers Sts