Mj Tom of the Artistic Cooperativa LosOtros returns to Athens, to present his new work, under the title “Limbus” 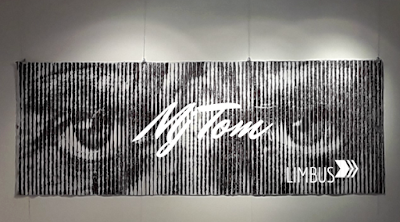 Opening | Tuesday 31 July 2018 | 20:00 – 23:00
After a period of silence Mj Tom of the Artistic Cooperativa LosOtros returns to Athens, to present his new work, under the title “Limbus” showcasing a completely new body of work, in Depot Gallery from July 31th until September 6th.
“Limbus” consists of a series of artworks in very large formats, in Black and White, with a minimal approach and a strong dialogue with the space. They say a lot by saying nothing. Just Looks or Gazes. And through these gazes, stories unfold.
Focusing constantly on what lies beyond the limits of everyday life, Mj Tom burdens himself with the faction of humans that intentionally [?] choose [?] to remain outside of what is considered socially conventional. By focusing on these overlooked or deliberately neglected humans, Mj Tom takes on the process of investigating these enigmatic persons.
Questioning and studying goes unnoticed, he blurs the lines between documentation and participation, by weaving the stories behind these universes. In doing so,he takes on some of their secrecy as well. The result is an ability to subtly bring out the mysterious dignity of these people and spaces that are so often neglected or prudently rejected.
The exploration of these unoticed almost invisible beings, who exist in every city and every country reveals a certain universality that is present throughout the work, counter balanced by the intimacy that the artist conveys in the way that he treats his subject matter.
The result is a complex and often open-ended social critique... an ‘Open Language’... a silent, sensitive poetry that is working against the saturation... the overburdening of messages and signals that we are subject to... within everyday life. Through a spontaneous, respectful practice, he attempts to make ‘a place for free thinking’... a ‘space of dead time’... using a language which is ‘infinite, abstract’, and thus ‘universal’. 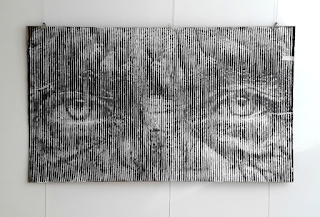 As he quotes “Limbus is not a exhibition or a show nor a series of, but a sequence of questions in visual form, a narrative in pieces or chapters of a book, or… A pilgrimage, typically of some length, or a return to familiar places in cities or the honoring to the recording of the emotions they emerged from them, or… “
And he adds “ I return to the gallery space to question... Question what is important and what it is not. Question the white cube, the space itself and the rules, that conveys. Question the way of seeing things and making artworks. Question the politically correct. Question the canvas and acrylic. Question the figurative. Question the abstract.  Question the ideas of contemporary art. Question the ideas of urban art. And above all to question myself. Why Question? To leave the comfort zone. To not create artworks that please or conform to the modern world.”
Almost a campaign against Youth and Beauty Culture and what it convey it, to the collective unconscious.

Limbus aka Limbo | a region on the edge of hell (limbus means "hem" or "border") for those who are not saved even though they did not sin, exists in Christian theology by Dante's time, but the poet's version of this region is more generous than most.

Dante's Limbo, technically the first circle of hell, includes virtuous non-Christian adults in addition to unbaptized infants. We thus find here many of the great heroes, thinkers, and creative minds of ancient Greece and Rome as well as such medieval non-Christians as Saladin, Sultan of Egypt in the late twelfth century, and the great Islamic philosophers Avicenna (Ibn Sina) and Averroës (Ibn Rushd).

For Dante, Limbo was also the home of major figures from the Hebrew Bible, who, according to Christian theology, were "liberated" by Jesus following his crucifixion.

About the Artist
European Visual Artist Mj Tom chooses not to share any personal information. Since 2000 he established the Visual Poetry | Urban Art Group LosOtros with his alter ego Andrea Nada. Seeing that, he lived between Berlin, Barcelona and Paris. His work has been exhibited at London, Paris, New York, Miami, Los Angeles, Vancouver, and Dubai.
…
His current body of work includes mixed media, collage, sculpture, installation, and digital printing. Irreverent and fleeting, able to define himself as a copy machine of art, sarcastic and deliberately anonymous, he questions almost every probable fact. The veneer of normality, the history as written, the common way of understanding nature and oneself as a part of it. 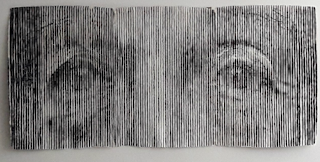 As he remarks “LosOtros is not an Artist or a group of Artists... LosOtros is a state of mind that engages a number of persons.. Not only those that create the Art Works, but also those that they try to understand them... We believe that Art is not important because there is an artist behind, but because there is a viewer in front. The meaning behind an Art Work is the meaning that the viewer build around it. The artist explanation has a very limited value. We don´t want to promote any manifest, nor to convince anybody about anything... We are not in Art to promote ourselves... Art is simply our lifestyle.”.
Depot Gallery
Neofytou Vamva 5
106 74 Kolonaki
Athens