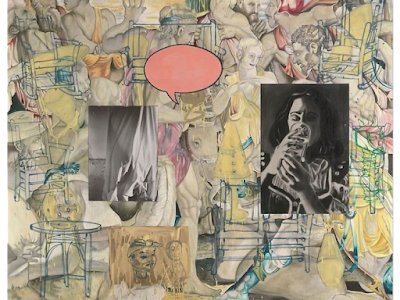 A star of the go-go ’80s art scene (and frequent punching bag for critics like Robert Hughes), David Salle benefited mightily from the Reagan Era art-buying boom, which is why his career went into a stall after the 1987 stock market crash that put an end to the good times in the art market. At the time, Salle was pronounced yesterday’s news, though, of course, that was never quite the case: He still had his deep-pocketed supporters, and continued to show at blue-chip galleries. He’s long since recovered his mojo to the point that the dip in his fortunes is largely forgotten, yet his current exhibition at Skarstedt’s uptown space features paintings produced during the same period in which his career fizzled, giving the show an extra dash of historical resonance.