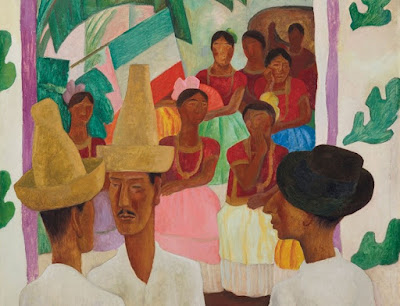 Last night in a jam-packed salesroom at Christie’s in Rockefeller Center in Midtown Manhattan, a sale of 19th- and 20th-century art from the collection of Peggy and David Rockefeller brought $646.1 million. Earlier this evening the second major Rockefeller auction, this one devoted to work from the Americas, brought in $106.9 million for 41 lots, roughly the same number as last night—the highest amount ever brought in for a sale of American art, according to Christie’s.
Tonight’s $9.76 million Rivera figure also surpassed the highest price ever paid for a work by a Latin American artist at auction, which was previously held by a 1939 Frida Kahlo painting that sold for $8 million at Christie’s in 2016. (Works have gone for higher prices through private sales, however.)
As with many of the works on offer this week, the Rockefellers’ relationship to The Rivals added to the allure of the work. It had been commissioned by David’s mother, Abby Aldrich Rockefeller, and Rivera finished it aboard the ship Morro Castle in November 1931 as he traveled from Mexico to New York for his retrospective at the Museum of Modern Art, which opened in December
Just one more bid it turned out. The lady in the room went to $10 million, and the bidding halted there. Perrin, finally getting a little rest, looked to her colleagues to ensure they were done.


The Rockefeller auctions continue tomorrow with day sales, and online sales conclude Friday. A number of pieces of jewelry will be offered at auction in June, when the final Rockefeller Collection sum is totaled but, already, last night, it had earned the distinction of being the largest single-owner sale ever held.
Labels: art art auction auction