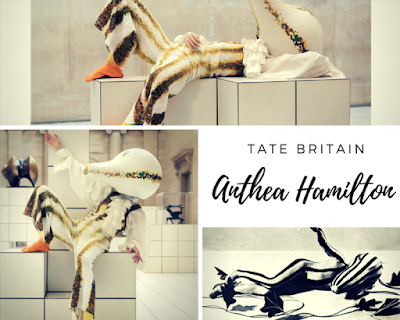 A solo performer in a squash-like costume inhabits the Duveen Galleries every day for more than six months for the Tate Britain Commission 2018. Each element of The Squash has evolved from Hamilton's interest in a photograph she found in a book several years ago when looking at improvisational theatre and participatory art practices in the 1960s and 1970s. It showed a person dressed as what looks like a vegetable lying among vines. The original photograph dated from 1960 and depicted a scene from a dance by American choreographer Erick Hawkins. Hawkins was interested in Native American philosophies and he took the form of this costume from the Squash Kachina of the Hopi culture.
As Hamilton had lost the original source of this image, she was not able to discover its origins and was left to imagine its context from the image alone. The artist has brought together tiles, structures, sculptures and costume, inviting a performer to explore their own interpretation of the image and how it might feel to imagine life as other, as vegetable.
The performer selects their outfit for the day from a collection of seven elaborate costumes. Each one is inspired by the original image and by different kinds of squash or pumpkin. The length of the galleries’ terrazzo floor has been tiled in domestic-scale white tiles to create a new environment within Tate Britain’s neoclassical architecture.
Until Sunday October 7, 2018
Venue name: Tate Britain
Address: Millbank London SW1P 4RG
Opening hours: Daily 10am-6pm (last admission for special exhibitions 5.15pm)
Transport: Tube: Pimlico/Vauxhall
Event website: www.tate.org.uk