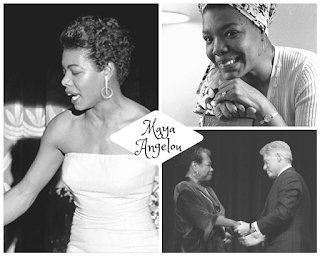 Google gathered a star-studded cast of celebrities, including Alicia Keys, Laverne Cox, and Oprah Winfrey, to help celebrate Dr. Maya Angelou.
Today's Doodle honoring the poet, civil rights activist, and author on what would have been her 90th birthday is nothing short of a masterpiece. When you click the homepage illustration, you'll hear the words of Angelou's empowering poem "Still I Rise" read aloud as drawings illustrating each line fill the screen. The recorded reading from Angelou is interspersed with sections read by Keys, Cox, Winfrey, America Ferrera, Martina McBride, and Angelou's son, Guy Johnson.
“Maya Angelou is not what she has done or written or spoken, it's how she did it all," Winfrey told Google. “She moved through the world with unshakeable calm, confidence, and a fiery, fierce grace and abounding love.”
Angelou was born as Marguerite Annie Johnson in St. Louis, Missouri in 1928. At seven years old, she was raped by her mother's boyfriend and, following the incident, was mute for six years. According to the National Women's History Museum, it was during this time and throughout her teenage years that Angelou began writing essays and poetry. At 15, she repeatedly applied to become a street car conductor, but was initially rebuffed because of her race. Her persistence paid off and she eventually became the first African American to hold the role in San Francisco. 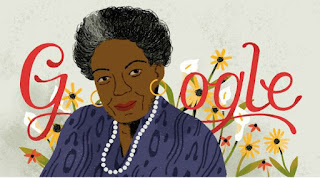 Among Angelou's numerous awards were the National Medal of Arts and the Presidential Medal of Freedom, which former President Barack Obama awarded her in 2010. Angelou died four years later at the age of 86.


Like many of Angelou's enduring works, "Still I Rise", a poem about resilience and strength, still feels potent in 2018: "You may shoot me with your words/You may cut me with your eyes/You may kill me with your hatefulness/But still, like air, I’ll rise."
Labels: art culture culture poetry