Taylor Swift, Ed Sheeran and Beck are among the acts for the BBC's new event, The Biggest Weekend. 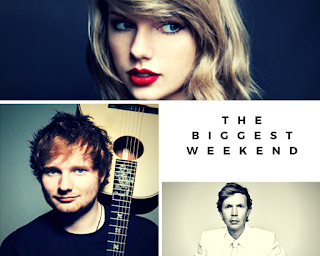 The new events will take place at four sites across England, Wales, Scotland, and Northern Ireland across the May Bank Holiday, which runs from May 25th to May 28th.
The first event, which is curated by BBC Radio 1, 1Xtra and BBC Asian Network, takes place in Singleton Park in Swansea on May 26th and 27th. Taylor Swift and Ed Sheeran confirmed to perform at that event thus far.
The second event will take place at Scone Palace in Perth, Scotland on May 25th and May 26th. BBC Radio 2 and 3 and curating this one, with Noel Gallagher's High Flying Birds and violinist Nigel Kennedy confirmed to play so far.
Finally, the English leg will take place at War Memorial Park in Coventry and has a bill that includes Billy Ocean, Snow Patrol, Eliza Carthy & The Wayward Band and Nigel Kennedy. BBC Radio 2 and 3 are in charge of this one.