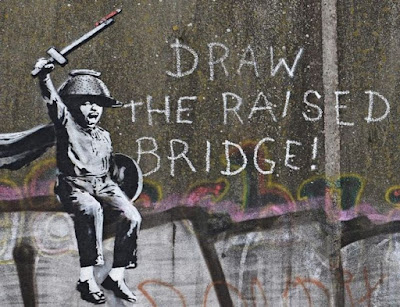 A graffiti artist has called for a street art area to be set up around a recently unveiled Banksy mural in Hull.
The mural on a disused bridge in Scott Street has drawn dozens of visitors after it was unveiled on Friday.
Hull graffiti artist Ollie Marshall wants the surrounding area to become "a creative art space" with designated legal walls to allow artists to paint murals.
Mr Marshall said the area was a "brilliant canvas for street artists".
"Hull's got a very, very rich heritage in the graffiti scene and it's something that we should be proud of," he said.
His call has been backed by Labour councillor Alan Clark.
Mr Clark said he will ask council officers to approach local businesses and property owners in the area to see if they would allow their walls to be used.
He said it was a chance to regenerate the industrial area by the banks of the River Hull in a similar way to how the derelict former Fruit Market area of the city was renovated as part of the City of Culture celebrations.
"Banksy's given us the perfect opportunity now, not just to put Hull on the map again after the celebrations of 2017, but to really develop an area," Mr Clark said.
Hull City Council put a protective screen over the Banksy work after it was defaced on Sunday evening.
A screen has also appeared covering a line of text on a nearby wall, which people have speculated is also by the elusive artist.
The writing which reads "There must be more to life than writing 'There must be more to life' on the walls..." has not been posted on Banksy's official Instagram feed.