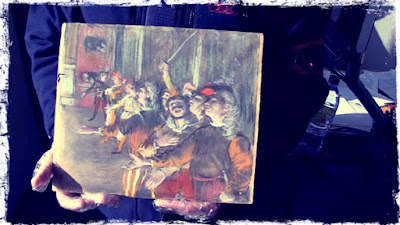 French customs officers have found an impressionist painting by Edgar Degas stowed on a bus, more than eight years after it was reported stolen.

The French Culture Ministry said that customs agents in Marne-la-Vallee were surprised to find a work of art bearing the signature "Degas" inside a suitcase in the bus' luggage compartment.

The ministry said none of the passengers claimed the suitcase during the search.

Experts verified the artwork as Degas' 1877 Les Choristes (The Chorus Singers), which depicts a scene from Mozart's opera Don Giovanni.

The painting was stolen from a Marseille museum in 2009 while on loan from Paris' Musee d'Orsay.

French Culture Minister Francoise Nyssen said she was delighted by the recovery of a work "whose disappearance represented a heavy loss for the French impressionist heritage".

Marseille public prosecutor Jacques Dallest said there were no signs of breaking and entering at the Museum from which Le Choristes was stolen.

Degas scholar and biographer Henri Loyrette previously said the artist was one of the most influential artists of the French Impressionist movement.
According to National Gallery of Victoria director Tony Ellwood the way Degas chose and treated his subject matter set him apart from his contemporaries, and influenced the course of modern art.