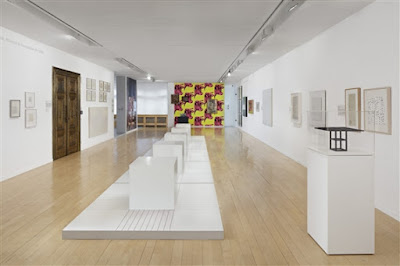 Daimler Contemporary  TIERGARTEN | BERLIN | GERMANY
JUNE 03, 2017-NOVEMBER 05, 2017
The exhibition ‘Serielle Formationen’ (‘Serial Formations’), jointly curated by Peter Roehr and Paul Maenz for the Frankfurter Universität’s studio gallery in 1967, can be seen as the first thematic exhibition on Minimalist trends in Germany. In the context of its exhibition series ‘Minimalism in Germany’, which started in 2005, the Daimler Art Collection is making a first attempt to re-stage the historical presentation.
‘Serielle Formationen’ was an outstanding exhibition that brought together the contemporary trends of the period. In particular, it showed artwork by artists from Germany and elsewhere side by side. A total of 62 artworks by 48 artists were selected because they were pictures and objects with ‘serial order’ as a visual feature—although the concepts behind them were highly diverse and sometimes downright contradictory. The European Zero movement was represented, alongside manifestations of Nouveau Réalisme, Pop Art and Op Art and American Minimal and Conceptual Art. The exhibition was accompanied by an ambitious catalogue containing six original graphical works and extensive artwork documentation and artist statements. “The ambition of ‘Serielle Formationen’ was to inform and to identify the differences between seemingly similar art phenomena.”
The exhibition presents works from the Daimler Art Collection as well as loans from German and international collections.