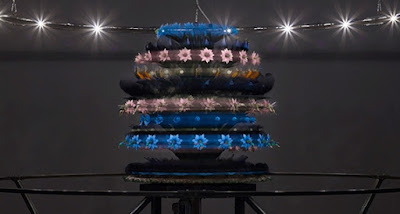 Chiostro del Bramante  ROME | ITALY
SEPTEMBER 23, 2017-FEBRUARY 25, 2018
After the great success of Love. Art meets Love, the unique art exhibition that had a turnout of 150thousand visitors in six months, mainly youngers, the Chiostro del Bramante continues to follow its original ideas proposing, once again, a remarkable exhibition of original artworks. The art exhibition will highlight the differences in individual perception of the artworks. The audience will have this experience guided by the poetical voice of some of the most important and provocative contemporary artists.
Sometimes breaking the rules doesn’t necessarily mean misbehaving, but expanding rules boundaries. A rule that the Chiostro del Bramante follows in its schedules is proposing “out of the box” exhibitions, in which originality is always the base idea of the project.
The Chiostro del Bramante has turned out to be, nationally and internationally, a point of reference for contemporary art. On this basis, it has developed the exhibition that will take place from the 23rd of September 2017 to the 25th of the February 2018. The name chosen Enjoy: Art meets Amusement, not only indicates a different way of experiencing art but also aims to create space for the artworks of worldwide known artists. Therefore, many of the artworks are site specific, designed and built specifically for this venue. The Chiostro’s organization- led by DART- sums, to the creativity of the exhibition, a remarkable productive effort presenting inedited art works.
Among other great artists, protagonists of the last century and the third millennium, are going to present their artworks. They are all linked by the pursuit of amusement, intended as its etymological meaning: “driven elsewhere”. Elsewhere, meant also as “other from itself” and the desire of getting lost in art is the common basis of the artists who are going to exhibit at Enjoy and whose art pieces will lead the audience through an invisible path in which the spectator will be able to see the artworks from different perspectives and therefore sense different perceptions.