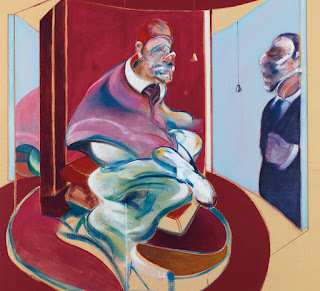 The work of Francis Bacon’s Study of Red Pope 1962. 2nd version 1971, was marketed with an on-request estimate of £60 million to £80 million ($78.4 million to $104.5 million), which, if achieved, would have made it the priciest artwork ever sold at auction in Europe. However, Christie’s could not find a buyer in that range, and the lot flopped.
The auction house had been spinning Bacon hagiography for a month, highlighting the fact that the painting hadn’t been seen publicly in 45 years.
Titled “Study of Red Pope 1962. 2nd Version 1971,” the 6.5-foot-tall canvas depicts Bacon’s two most famous subjects: his lover George Dyer and Pope Innocent X.
A smaller Bacon painting, “Head with Raised Arm" (1955), depicting Pope Pius XII, sold for 11.5 million pounds on Friday, above the high estimate, after the commission was added.