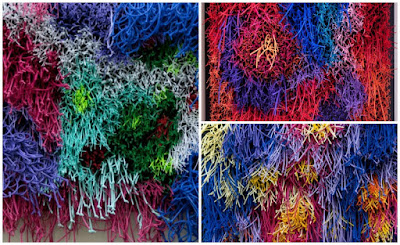 The new season of the gallery begins with the above exhibition and we will be happy to be with us at its opening.

As Isabelle Diacre, author of art articles, notes for the work of Cléo Robine at her article  «The world does and undoes itself » …… The world, which is in perpetual movement, is made and dismantled at the mercy of human miseries and disorders of the planet. These human and animal migrations carry their share of hope and pain and leave in their wake traces of lives in reconstruction.
Cléo Robine develops a concept of wired architecture, composed of multi-coloured voluminous threads of different shapes and lengths on a vertical platform. 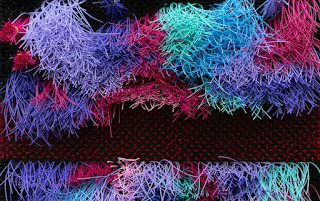 The 15 paintings presented here show the movements of living beings and the traces that they impart in the environment. Some alter while others feed. Dispersions, regroupings, wanderings, the paths traveled, riding the surface of the nourishing earth and profoundly modifying its expressions. These paths, sometimes chaotic, are illustrated through the entanglement formed by the threads and their size. In the image of these fields of sliced colors there’s alternating emptiness and overpopulation. The weight of these works makes us experience the difficulties encountered, whereas the light, according to where the gaze is directed, intensifies the palpitations of this world by capturing its vibrations.
Through this striking living patchwork, worked like tapestry, the artist sketches a future in reinvention.

Also, Mylène Vignon, contemporary art expert at her text titled  Space as principle comments:
Cléo Robine is bridging colour gaps to transgress the chaos that matter imposes.
She goes beyond simple pictorial expressions to push the limits, creating a language vibrant of sincerity. To make the contrasts audible, to work out the traces, the signs, the imprints proves to be one of her main artistic motivations.

Cleo captures the impalpable: space as principle, subject as language, colours as signals ... And the lines that are pushed to the highest, draw the purpose of a possible and necessary poetry.
She is interested in the body, according to the scars of life, avoiding useless chatter, with the concern for the purity to the borders of minimalism. Her approach is noble and focused on the essentials. Prioritising the recycling of waste for art, she proves that nothing is finite, all begins again.
A graduate of the Ecole Boulle, this rebellious and obstinate artist, nourishes her quest for sharing, even in the silences of fallen territories. 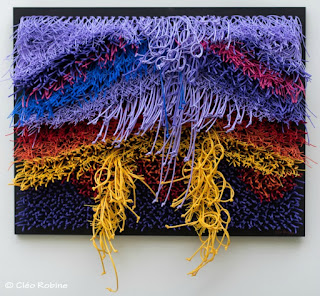 Recently, the artist alerts us to the awakening of consciousness and this philosophy comes at the right time. As the vacuum seeks fullness, Cléo Robine fills her part, considered as necessary as breathing, to accomplish her goal, with that humility that characterizes her.
Cléo Robine at her interview to the art editor Isabelle Diacre says:
“Touch the essential, not to encumber oneself with the useless or superfluous. My approach uses the intimate and the universal. I reject the description and the anecdote in favor of pictorial intensity. What matters to me is the vibration, the deep, the secret, the essential. That which animates every living being. A "life" which feeds me when touching a tree or stone. As if it is an organic need to anchor myself even deeper into Mother Earth.
For a long time, the sacred bond between the human species and its environment, always in tenuous and fragile balance, has been undermined by profit and power, generating incomprehension, intolerance and suffering. It is the very essence of my work to collect those traces and impressions left by men on a nature mistreated by its hosts, as so many trials and testimonies of the roughness of our time. Even today, indignation and anger animate me, even if I draw a certain resilience coupled with optimism and hope.
The subjects are numerous and serve as a starting point for my work. First of all there is nature in which I immerse myself to capture its palpitations. Then comes the phase of interiorization. I refocus, immersing myself in the musical universes of Joe Purdy, Marias Callas or James Newton Howard. I am then connected with myself. I watch what happens. I allow feelings to emerge. Everything happens quickly: the sketch, the colors, the choice of material, which I want to “feel” while working. I need textures, the correlation of materials such as wood, plaster, strips, but also spikes, nails, nuts, threads, ropes, fibers, juices, soups of materials. The smooth and the rough, as a kind of language between the finite and the imperfect. Then I pierce, cut, open, close, creates volume. I balance differences, I tame tensions, I reinterpret ruptures and I give meaning to every single knot. I seek to thematisize the hidden side of reality and render the unconscious visible. Henceforward, I reverse the use and place in its void emptiness and fullness, reality and appearance, the fundamental and the superfluous. The notions of limits and passage constitute the keys to decrypting my work.
Even if Chagall, Soulages and Zao Wu KI have impressed me very much, I remain close to my instincts and my truths. "Creativity is the greatest rebellion that exists. If you want to create, you have to free yourself from all conventions"(Osho). Responding to a demand for the absolute, I seek to provoke reflection, reactions, repositioning of oneself, questioning with a free gaze, freed from all shackles. My paintings are not windows to the outside but doors that open towards the inside of the mind”.

Creating a different biography for the life and the work of Cléo Robine, the art editor Isabelle Diacre comments:
It’s in Brest “city of shades, colours and sarcasm”, as per Hervé Hamon, where Cléo Robine was born. Already when she was very young, she started questioning her desires and lifetime projects.
She finds no comfort in immersing herself in complaisantness and loneliness is her sweet companion and source of reflexion.
Being a world citizen, she is well aware of the impact the world has on one’s own development, including personal responsibilities.
She studies at the École Boulle where she enrolled in tapestry and where she developed the art of weaving and working with threads. She further studied interior architecture to tame forms, shapes,, symmetries and geometry by building contemporary and clearly structured minimalistic furniture.
Her studies, knowledge and expertise enrich her creativity and she draws all the needed energy and inspiration from her indignation.
In 1995 she finally braces up and dedicates herself exclusively to the arts and creation, especially painting.
Until 2005, she painted acrylics in a minimalistic way using big formats and vibrant colours.
She then started adding different materials to her works. In 2010, she started using coloured PVC threads in her series entitled “Take the water” and now recently in the series named “The world does and undoes itself”.
Since 2012 she is experimenting with a new material, namely, cardboard on wood.
Life and happiness are important to Cléo Robine, who aims at denouncing all kind of injustice with her works. She further cares to awaken awareness by encouraging us to enjoy all wonders that life has to offer. Her work also contains some sacred and spiritual approaches. Being a free and sensitive artist, she avoids all useless gossip, doesn’t claim any belonging to an artistic movement and concentrates on her most primal feelings.
She is sketching a better world. This is her answer as an artist to this cruel and unfair world. Hope is right in front of us. Hope embodied in her expressions on canvas, creating harmonious links between humanity and their environment.