Nikos Engonopoulos: With the Colours of the Word and the Word of Colours 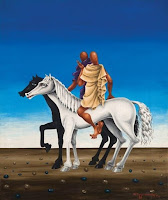 Place: Museum of Contemporary Art, Basil & Elise Goulandris Foundation  ANDROS | GREECE
Duration: JUNE 25, 2017-OCTOBER 01, 2017
For the summer of 2017, the Museum of Contemporary Art of the Basil and Elise Goulandris Foundation is preparing a tribute to the distinguished poet and painter Nikos Engonopoulos.
Nikos Engonopoulos lived by Horace’s maxim Ut pictura poesis: “as is painting so is poetry” or, more freely translated: “Painting and poetry must be based on the same principle”. He was a painter, a poet, he was also a professor at the National Technical University. Three inter-related paths – the term career is unfitting in this case – for a single man, who followed them unceasingly and tirelessly for almost fifty years. Three areas of activity separated to some extent which, however, enriched one another thanks to a prevailing common denominator: Engonopoulos’ immense, diverse and insatiable - over time – broad and wide-ranging education.
The aim of this dedicated exhibition is to highlight this manifold activity and the undisputed talent he demonstrated in everything he became involved. In a museum setting of course, the facet of the painter inevitably prevails without however overshadowing the side of the poet and the professor. There is so much one can say about the role of the painter alone... The painter who is as afraid of the black hole as the writer is of the blank page, as he described very well himself:
“The painter handles colours and brushes, oil, white spirit and others. But he knows that behind the canvas there is a terrible, deep black hole. He moves the canvas aside, with the boldness of a dream, and leaning into the dark abyss he sees far, far away, near the bottom, something glowing faintly. At the same time -silently- black birds, winged fish and ghosts are flying. He comes back to the light. Between him and the canvas is now a beast. But still he is not afraid”.