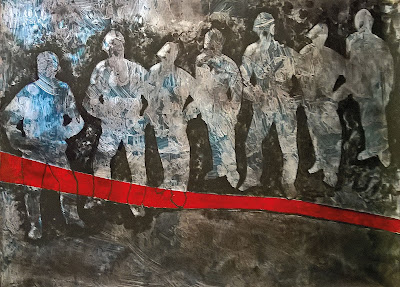 The solo exhibition of the awards – winning visual artist EIRINI PAGONI – LOUTI, titled “42 miles road”, will be presented from Monday, September 25 till Tuesday, September 31 at the Center of Collective Artistic Activity SYN (Tositsa str. 17, Exarchia, Athens). The originality of this exhibition is due to the fact that the artworks were born and created inside the gallery SYN, where they are presented. The opening date of the exhibition is on Monday, October 2 at 19:00 and the entrance is FREE.
Completing 42 years, as an idea and space, the Center of Collective Art Activities SYN is the inspiration for the creation of an exhibition within the aesthetics characterized by the aesthetic perception of the materials and forms of the artist Eirini Pagoni-Louti, as she explains below:
“SYN is a concept that began in 1975, right after the change of the political regime, by the painter and teacher Theodoros Pantos, and some dreaming visual artists, not only as an art space but also as a focal point for the education and movement of ideas and ideals, freedom, ethos and creation.
I became part of this Idea in the early 80's, when we assumed that through revolution and certainty that we were able to change the world. Art, like any form of Knowledge and Expression of our Life, is, and owes to be, a Political Act. Those years, were really very creative, everything was new, everything was a surprise, everything was beautiful. Let's not forget that Aesthetic is the Highest Ethic.
However, the "groups", having self-restraints and self-protections, conflicts and contradictions, are in the process of time, impossible to remain unchanged, static. They stumble upon either the selfishness or the different evolution of their constituents. For me, it was time to "travel" elsewhere.
It has been now 30 years since that time. I have worked and traveled to other destinations. The ideology and perception of my Art Creation and my life of those years were alive and present in every single step of mine. My return to this place since last winter has nothing to do with nostalgia or romance. Besides, by nature, I am not at all like that. It probably has to do with my need, with my debt to finish this destination that I started in my very youthful years. I am not a person I dream of, I am a person who believes "in the debt". From that time on, my suffering began. "What kind of exhibition should I do?? What concept?. I wanted something that would be capable to express the content of 42 years of this space, of this “road” in the course of SYN, albeit with my own aesthetic perception, with my own materials and with my own forms. 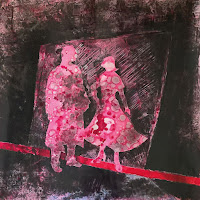 At the beginning of July 2017, this light beam came a big "flash"!. I got  two A4 sheets of paper, I stuck along, I quickly designed my idea,  quickly with my pencil, and with two clothespins I hung it on my fireplace. It was ... a 42 miles road. ..... 1975 to 2017 ... 42 years.
I go to SYN, Tositsa 17 in Exarchia, on September 25, 2017, Monday,  without any ready work from my studio. Only with my materials.  Early in the morning.  My exhibition, my show, starts from that moment on, and it is open to everyone. Everything that will be exposed, it will be constructed within the space itself. I will not leave the place until I finish the work, not even to go home to sleep. I hope and I wish that the weather will be my ally, for the colors to be quickly dried. On Wednesday, September 27, at 7 o'clock in the evening, everything will be ready for what we would call an official inauguration. The whole process of implementing the exhibition will be videotaped, mounted for the audience to come and will be posted on You Tube. I hope my form will most accurately express the content of 42 years.”
EIRINI PAGONI – LOUTI biography:
Studied in the atelier of Theodore Pantos and Spyros Koukoulomatis, drawing, color, and History of Art. Studies in the School of Visual Arts, New York University,and  the New York  Fashion Institute of Technology ,for Theatrical Costumes. Later continues studies for costumes at Esmode, Paris.
After the return in Greece 1984, becomes a member of the  Artistic Center  SYN,  where in Gallery SYN,  makes the  first exhibition .
SOLO EXHIBITIONS
1984  SYN
1986  Manteion
1988  Opsis  with ManolisPetalas.
1990  The Art of Independence.
1992  Ersis  Gallery
1993  Titanium
1993  MariaGoumaΑΓ
1994  SYN
1996  Titanium,“THEOGONY” Multi  Art  Work,
(Painting, Installation, Music, Video, Dramatized  Dancing)
1997  Aigeira Cultural Center,
1999  Selini,  “Visual  Creations  of  Childhood”
( Elaborated  Metal Materials)
2000  TechnopolisPeireos, Installation, “Tin Preservation of  Cereals”
2001  The  American University in Aix En  Provence, France,
“From the myths of  Fontaine” (Elaborated Metal Materials)
2003-2004    Petroupolis Festival, with  ‘Echodrasis’ , Nikos  Touliatos,
“Sound  Genesis”, ( Metal  Installation – Music Instrument ).
2005  ARTISTIC ENCOUNTER  GREECE – CHINA, Beijing ,“Seeds of the Future”
(ElaboratedMetals).
2007  LIQUID BLUE , cultural actions of Trichonis Lake, with Jenny Tsoumbri,
Art Productions.
2009  CONTEMPORARY POLITICAL SΕMΕIOLOGΥ ON  PABLOS’ PICASSO
QUERNICA, Dimokritos Physics Science Center.
2010  LOVING, DANCING , USED THE RECYCLE BAR
2010  NOT THE OLD, NOT THE NEW, BUT THE  NECESSARY CHILLI.
ART GALLERY
2013  THE AUTOBIOGRAPHY OF LIGHT,
2017  42  MILES ROAD , SYN CULTURAL CENTER