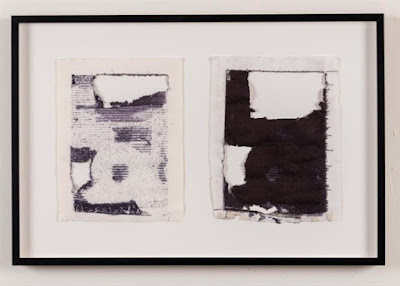 Cristin Tierney Gallery  NEW YORK | USA
JULY 13, 2017-AUGUST 18, 2017
Cristin Tierney Gallery is pleased to present Tim Youd: Ecstatic Reading, opening Thursday, July 13th and continuing through Friday, August 18th, with an opening reception on July 13th from 6:00 to 8:00 pm. This is Youd’s first solo exhibition in New York City, and the artist will be performing at the opening.
For his New York debut, Youd will continue his 100 Novels project by retyping Patricia Highsmith’s The Talented Mr. Ripley at the Cristin Tierney Gallery (performance dates and times are listed below). The exhibition will also feature a selection of drawings and works on paper.
A performance and visual artist, Youd is presently retyping 100 novels over a ten-year period while concurrently compiling a body of related paintings, drawings, and sculptures. During each of his performances, Youd retypes novels on the same make and model typewriter the author used, in a location charged with literary significance specific to the novel. This summer, Youd is retyping four novels in Italy in an “Italian cycle,” which will culminate in his retyping of The Talented Mr. Ripley in New York. This performance will pay tribute to Highsmith’s protagonist Tom Ripley, who escapes his troubles in New York by sailing on an ocean liner to Venice.
Each book is typed on a single sheet of paper, which is laid on top of a second sheet and run repeatedly through the typewriter. Upon completion, the two sheets are separated and mounted side-by-side as a diptych. They serve as a relic of the performance, containing all of the artist’s keystrokes within the rectangular form of two pages of an open book.
Youd describes the act of reading as devotional, requiring such total involvement as to make him lose awareness of time, space, and surroundings. Ecstatic Reading derives its name from this altered state of consciousness, and the transcendence experienced by Youd in his performances as he re-types entire novels from beginning to end.
Diptychs from past performances will be on view in the gallery, and will include Philip K. Dick’s A Scanner Darkly, John Rechy’s City of Night, and Flannery O’Connor’s The Violent Bear It Away, among others. Also on view will be a selection of typewriter drawings. Illustrated by 100 Olivetti Lettera 32s with Tally, the drawings are composed of one hundred accumulated and superimposed outlines of the same model typewriter, with a small index at the bottom logging how many times and on which days Youd drew the image.