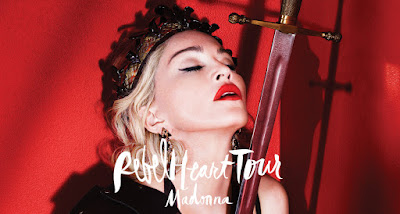 Madonna has announced the release of a new live album and concert tour film for her recent Rebel Heart Tour, which is due to be released next month on September 15th.
The news was announced today to coincide with the singer's birthday and both the new live album and concert film will feature live performances taken from various shows on her Rebel Heart Tour, which began in Canada in September 2015 and ended in Australia with the tour's final show at Sydney's Qudos Bank Arena in March 2016, taking in a total of 55 shows along the way
The Rebel Heart Tour live album is available as a standalone double CD and will feature 22 live versions of songs from across Madonna's back catalogue, including her most recent album Rebel Heart. The concert film meanwhile is available as on DVD or Blu-ray and will feature the concert film co-directed by Danny B. Tull and Nathan Rissman, as well as behind-the-scenes footage and rare footage from Madonna: Tears of a Clown, a show celebrating the singer's return to Australia for the first time in 23 years.


Additionally, the Rebel Heart Tour concert film is also available as a CD+DVD or CD+ Blu-ray bundle, which will feature both the concert film and highlights form the live album.
Labels: music music artist