A long-lost Banksy artwork is rediscovered 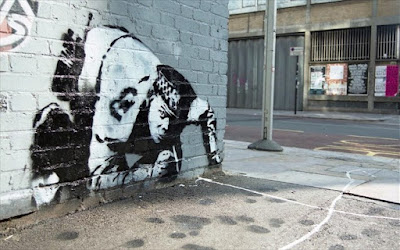 Snorting Copper was missing for a decade after being vandalised and boarded up – now it has been uncovered in east London
A Banksy painting that appeared on a public toilet block in east London, only to disappear after it was vandalised, spray-jetted by the local council and then painted over, has been rediscovered over a decade later.
Known as the Snorting Copper and considered an exemplary image by the elusive graffiti artist, it shows a uniformed policeman on his hands and knees snorting a line of cocaine.
Although the painting has been valued for insurance purposes at £1.25m, Jonathan Ellis and David Kyte, who uncovered the painting after they bought the disused site, say they have no intention of selling it. Instead, they are restoring it and will return it to its original site in Shoreditch, Hackney, so that the general public can see it. The unveiling will take place on 5 October.
Ellis said: “We’re putting it back in exactly the same location it was painted on the toiletblock, but we’ve put it back on the inside of the glass, so it can’t get vandalised or damaged. We’re lighting it up 24 hours a day so you can see it.” 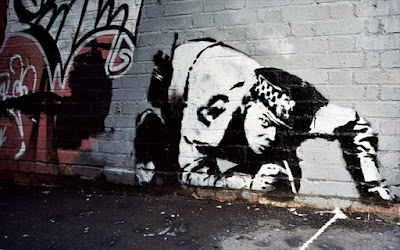 Banksy, known for his stencil-based images, has maintained his anonymity, despite repeated attempts to unmask him. Describing himself as a “quality vandal”, he has made his name by poking fun at authority figures through artworks in public places. Stencil enables him to work at speed, quickly disappearing into the night.
In 2005, he smuggled his own works into major museums including Tate Britain in London and the Metropolitan Museum in New York. In 2015, he openedDismaland in Weston-super-Mare, a temporary amusement park and conceptual art show.