Haim release video for new song 'Right Now' and announce new album, Something to Tell You 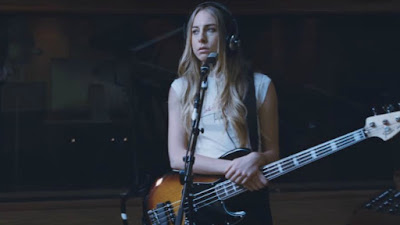 Haim have unveiled the first new song from their sophomore album, announcing a release date and title for the follow-up to their 2013 debut album Days Are Gone and releasing a video for the new song, 'Right Now', directed by Paul Thomas Anderson, the man behind films such as Boogie Nights and Magnolia.
The new album will be called Something to Tell You and the band have announced that the album is set to arrive on July 7th.
The band had previously revealed that a new album was underway and that they expected to release it this summer, also saying that they have been back in the studio with producer Ariel Rechtsheid, who manned the controls on their first album and has also worked with the likes of Charli XCX, Vampire Weekend and Madonna, as well as contributing production work on Adele's 25 and Beyonce's Lemonade.


You can check out the video for 'Right Now' Here: Haim
Labels: music