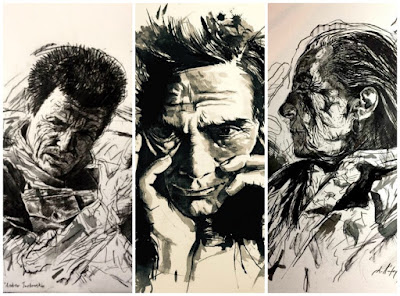 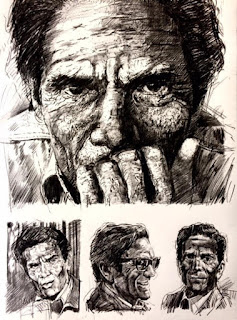 “What possibly could such personalities as Pasolini, Kounelis, Pound, Tarkovsky, Axelos, Foucault, Angelopoulos, Simone de Beauvoir, Emma Goldman, Rosa Luxemburg, Baudelaire, Godard, Beckett, Fellini  be doing in Athens? Twenty or more “apostles” of art, cinema, and literature meet up through  the remarkable “penmanship” of visual artist, Dimitris Lambrou, who “iconizes” and revives the vanguard of global intellect (in modern times), so that they stand as lighthouses against the darkness of the structural crisis experienced today, at  an intellectual, cultural and economic level. It is not at any gallery or art hall that they meet, rather at a select meeting venue for contemporary thought and art, an open conversation field, a place where young artists can take the floor.
Dimitris Karatzas, MET graduate, ASFA graduate, Film Direction at Stavrakos’ School graduate, also notes:
“It is no accident that just before the advent of the first photograph in 1826 by Niepce, David paints his greatest masterpiece “The Death of Marat” (1793), at a time when the portrait, at least in Western Art, has come to feature the hero at his peak moment  of victory, that  of his death.
It is at this time when photography appears. Photography use has played a double role to this day, namely to state the condemnation of the “aura” on the one hand while transforming the mundane on the other. 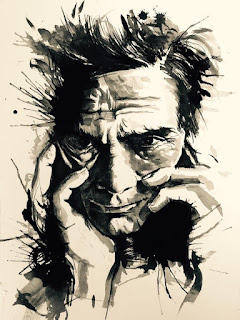 As the flagship of urban actualization photography seems to have reconciled several contradictions within itself.
It stood as the magic potion playing a major role in the healing of the wound left, symbolically at least, by a hero with his eyes closed, dying because of his ideals in a mundane scene in his bathtub.
As a visual artist, drawing from the photograph means revisiting that wound which was once healed, reopening it and reading it incessantly.
Such a process becomes even more personal when this is done using drawings as a vehicle, as, even though we may have a minute satellite picture at our disposal, most of the time it takes a simple drawing line on a map for us to find our way.
Drawing from a photograph means cutting up the wound and re-stitching it using your own stitches. This is the main concern underlying Dimitris Lambrou’s work.
Dimitris Lambrou : a brief presentation
He studied at ASFA (Art School Of Athens) from 2004 to 2010, under Professor George Lazongas. Later he completed a Master’s degree at ASFA (2011-2013) with honours.
In 2011 he participates in a European and Mediterranean Biennale entitled” Symbiosis, Rome/ Italy, Thessaloniki/Gr.
In 2013 he takes part independently with a solo presentation of his work in the International Modern Art Venue “Remap 4”, entitled “Story as a Dream / Athens/ Metaxourgeio/ Gr.
2013 also finds him exhibiting together with Vlassis Kaniaris at a historical exhibition in the Lola Nikolaou Gallery, entitled “1+3”.
In 2014 he co-exhibits with his Professor George Lazongas at the Lola Nikolaou Gallery, with the title “Two Generations / Three writings”.
He established the Lustspiel group, which participated in several art happenings in Art Athens in 2013 and 2014.
He has also set up the Dipoles group, together with art scholar and curator Efthimis Lazongas, whose work led to an exhibition entitled Dipoles, at the Art Gallery of Athens. 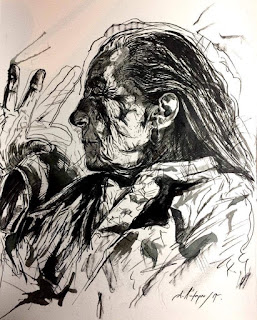 He has taken part in the “Manipulation” exhibition at the Depo Darm Gallery, and has also taken part in several Art Athens happenings either individually or as a member of a group.
In 2016 he participated in Back to Athens 4, an international modern art venue.
He is currently co-curating with Efthimis Lazongas (art Scholar, Member of Faculty of the ASFA post-graduate programme) a great meeting of young and significant older artists on the subject of “Secret”, which is to take place at the end of 2017.
General Information
Opening: Thursday, 6th April, 7 – 10 pm
Duration: until end of July