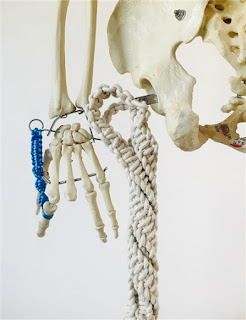 GALERIE KOAL  Germany | Berlin
APRIL 27, 2017-JUNE 10, 2017  Save to calendar
Jeanno Gaussi: Imaginary Friends - Galerie Koal
To Jeanno Gaussi, home means work. She has to make the places where she lands her own. Tame the things that she encounters. The artist fled Kabul with relatives at the age of four; she only saw her mother again years later in Delhi. Gaussi dealt with the loneliness, the isolation and the unalterable conditions that shaped her childhood by creating a complex imaginary world. A tree in a park and a human skeleton model in a chaotic flat became beloved friends; things carelessly thrown away were collected as precious treasures.
In Imaginary Friends Gaussi alludes to her ability to conjure up elements of home in the unfamiliar. When the artist moved from Berlin to San Francisco she was again confronted with feelings of foreignness and invisibility. So she created a series of figures with objects and materials that she found on the streets of Bayview and the neighbouring Mission district, now on show as a whole for the first time.
In earlier works like Dreams on Wheels (2015) Gaussi explored traditional artisanal techniques from India and Afghanistan in order to give expression to her search for identity and its related social and cultural processes. For Imaginary Friends she learnt the weaving technique macramé. Originally hailing from North Africa, macrame was extremely popular in the hippie era and is currently experiencing a renaissance in California amongst many other places.


Gaussi’s meticulous needlework results in very personal objects that can appear touching, tragic or humorous depending on the angle. The works do not only refer to the migrant experience, however; Gaussi’s figures can also be read as a comment on the search for meaning within affluent societies, showing that it is only by engaging with things that they gain value.
Labels: art contemporary art modern art
Location: Βερολίνο, Γερμανία