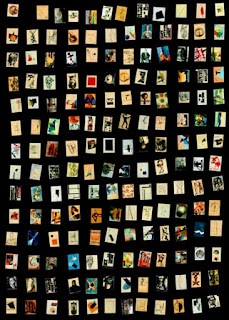 Where: State Museum of Contemporary Art, Thessaloniki
APRIL 05, 2017-APRIL 23, 2017
In his new project Anatoly Shuravlev argues on the subject of the form as a primary component of art. In the Russian avant-garde, form was dominating and could determine the content or bring new meaning to it. Non-objective images didn’t use a given topic as the starting point. They structured the content gradually through combinations of color and line, light and form. Such combinations led to the creation of a new alphabet that radically changed both the vision of art and our view on art.
The artist uses 1000 images of Russian avant-garde artworks from the George Costakis collection by altering their scale and by photographically reproducing them in size 10 x 8 mm. In this way, he calls us to revisit the issue of form with the help of a new alphabet invented by the deconstruction of the formalistic art itself.
Forms are again suspended in a new world and can be studied as if they were letters of a different alphabet or signs for an imaginary system. Eventually Shuravlev revives the value of these works by creating a new space, a total installation, an extra-ordinary Art Temple, which calls for the experience of a future world-view of the Art. A whole collection of paintings and drawings becomes one single artwork, which not only acts as a tribute to the historical avant-garde but also as an invitation to see the historical avant-garde projected in a totally new way.
The installation will also include original works from the Costakis collection with originalworks by Kazimir Malevich, Ivan Kliun, Liubov’ Popova, Mikhail Matiushin, Solomon Nikritinand others.
Artists on show
Anatoly Shuravlev
Ivan Kliun
Kazimir Malevich
Ljubov Popova
Mikhail Matiushin
Solomon Nikritin
Contact details