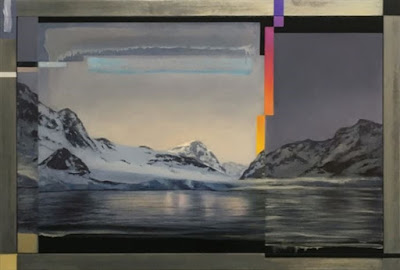 NOHRA HAIME GALLERY  USA | New York | 57th Street
NOVEMBER 23, 2016-JANUARY 14, 2017
The work of Adam Straus, spanning a three and a half decade career, will be on view at Nohra Haime Gallery and Adelson Galleries from November 23, 2016 – January 14, 2017. The two exhibitions at 730 Fifth Avenue will showcase paintings, works on paper, sculpture, and photography. Straus is known for his majestic and luminous depictions of the sublime, which are often saturated with a deep concern about social and environmental issues. His penetrating dark humor can transport the viewer to post-apocalyptic worlds and often offers a wry observation on how humans have altered the natural landscape. The exhibitions coincide with the publication of a new monograph (Gli Ori, Italy, November 2016). An opening reception will be held on Tuesday, November 22, from 6-8 p.m.
With more than 40 works, the exhibition at Nohra Haime Gallery will survey Straus’s oeuvre from 1979 to 2016. While the focus will be on paintings and works on paper, Straus’s little-known photography and sculpture from the early 1980s will provide context for his later transition to painting. A number of the works are from private collections and will be on public view for the first time. At Adelson Galleries, the exhibition will focus on 14 paintings on canvas and works on paper from 2011 to 2016, many of which, in a witty and irreverent manner, refer to how technology alters our view of nature. Straus’s cinematic expanses are sometimes painted on jute, which provides a rough surface that softens the image and creates the look of a screen.
As Amei Wallach writes in the essay for the book, “Think of the sheer pigheaded guts it took for as serious and ambitious an artist as Adam Straus to become a landscape painter in the 1980s. A century had passed since Cézanne torqued his trees into astringent meditations on the nature of painting; decades since the Abstract Expressionists swallowed the genre whole. The tradition into which Straus dared to tread … was sorely in need of reanimation. His disruptions in the years since have unsettled received assumptions as much through dark humor and bravura painting as through offering a reassessment of what it means to paint the beauty of nature in ugly times. It is important to him that his paintings are accessible…  But that is only the first, skin-deep level, and it is animated by compound subterranean layers of passionate conviction, cosmic yearning, and comedy.”
Among the highlights at Nohra Haime Gallery will be McStop, 1993, in which a tiny depiction of the golden arches of McDonald’s dots an otherwise pristine evening setting. The painting was inspired by a view on a cross-country road trip in the American Midwest.