Matthias Müller: While You Were Out 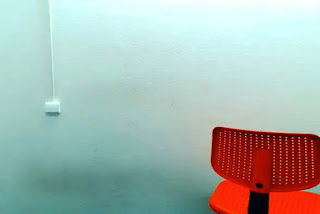 CAMPAGNE PREMIÈRE  Germany | Berlin
OCTOBER 14, 2016-DECEMBER 03, 2016
In Matthias Müller's extensive new group of works consisting of photographic works, a multiple and a video, the artist makes use of an archive of 1,500 screenshots. The images come from streams emanating from private chat rooms of the Web 2.0.
The hundred postcards of the edition ‘You Are Here’ offer views into one hundred of these empty chat rooms that all share one characteristic: On their walls are geographical maps of all types – urban maps, topographic maps, sections of atlases. They seem to reflect the wish to participate in another, larger world and at the same time express a strange ambivalence arising from the fact that the virtual space on the Internet, concealed by the protagonists through fantasy names such as “Neverland” or “Somewhere,” are linked to their actual location by these references. Coming to light here is the irreconcilable conflict of borderless proximity: the yearning to be simultaneously anonymous and located, both individual and omnipresent. By transforming the screenshots into postcards and thus handing them over to the viewer who can touch and move, even mail them, Müller restores an intimacy and binding character to communication – qualities that are under threat in the World Wide Web.
In the photographic work ‘While You Were Out,’ Müller arranges countless office chairs according to shape and color in the style of a scientific wall chart. Also in ‘Waiting Rooms,’ a frieze consisting of 28 individual prints, the artist transfers interiors into a serial arrangement and, through almost film-like connections, conveys the impression of a common bond existing between them. The selection, treatment and composition of his images gives rise to a concentration of reality which, amid the random nature of the appearances, reveals an almost harmonic order. Müller imbues his spaces with a painterly quality by blurring them slightly in the low-fi resolution of consumer webcams and transforming them into frozen-frame images as inkjet prints, thereby restoring them to an analogue sphere. Cracquelé-like, digital artifacts convey the impression of tiny fissures in the glaze upon paintings, and the choice of pictorial motifs is reminiscent of the subjects and representational forms of painting – whether the delicate atmospheres of light in Vermeer's spaces or the melancholic interiors of the symbolist Hammershøi.
In the video loop ‘Air,’ the “low” provenance and trivial motifs of the visual material stand in contrast to the sublimity of a piece by Johann Sebastian Bach as an elaborate expression of high culture. But just as the images of the empty spaces do not show the presence of any persons, so has the musical composition been partly stripped of its melodic upper voice: The minimalistic bass line seems like an etude with multiple variations of a simple musical motif. The title ‘Air’ alludes to the mode of Internet users whose images provide the visual material of the video: They are broadcasting, are “on air.” At the same time, the title refers to the effects of air currents we are observing; it sometimes seems as if an analogue breeze is stirring up the digital clusters and artifacts of the webcam images.
With his treatment of visual material from the Web 2.0, Müller focuses on a part of moving picture production that differs in various ways from the filmic genres which up to now have been central to his individual works and joint projects with Christoph Girardet. This extensive sector does not consist of professional productions but is the work of amateurs. The recordings made here are not introduced into a new narrative sequence with the help of montage but develop in real time with no external intervention. They have a fleeting character and are normally not preserved. Most of the time, these images involve only one figure who produces them and is simultaneously their subject. Matthias Müller is interested in the moments when the protagonists have departed from the scene. As spaces that are simultaneously private and public, chat rooms have lost the domestic space's fundamental function of protecting intimacy and turned into virtual contact zones for exhibitionists and voyeurs instead. In Müller's treatments, they are freed of their subservient function as backdrops for performances. With his studies of presence and absence, the artist is continuing his investigation and representation of spaces which, in his various filmic and photographic works, evolve into autonomous, evocative spheres of contemplation and experience, are transformed into stages and projection surfaces for emotional and psychological states and processes.