Lady Gaga to Perform at the 2016 American Music Awards 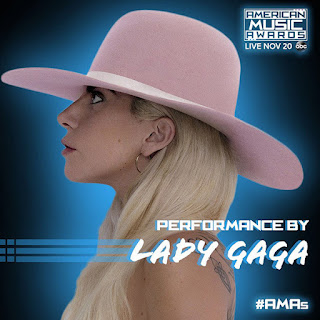 Dick Clark Productions and ABC announced Tuesday that the "Million Reasons" singer will perform live at L.A.'s Microsoft Theater on Nov. 20. The pop star joins previously announced show opener Bruno Mars, as well as Sting, this year's American Music Award of Merit honoree. "Bringing #JOANNE to the @AMAs on 11/20!" she tweeted Tuesday. "See u there! #AMAs."
The "Perfect Illusion" singer, who is currently promoting her fifth album Joanne, is a nine-time AMAs nominee. Gaga, 30, took home the award for Favorite Female Artist—Pop/Rock in 2010.


Gaga last attended the annual event in 2013, arriving on the red carpet via a costume horse. Later that night, she hit the stage with R. Kelly to perform "Do What U Want" from her fourth album, ARTPOP. It was in 2009, though, that Gaga gave her first American Music Awards performance, singing a medley of "Bad Romance" and "Speechless" from The Fame Monster.
Labels: music music artist