“Ugo Rondinone: the sun at 4pm” 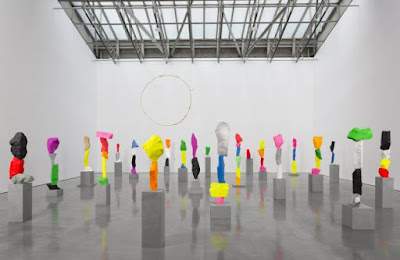 Gladstone Gallery is pleased to present the sun at 4pm, an exhibition that continues Ugo Rondinone’s decades-long examination of the link between the natural world and the human condition. Extending the artist’s mining of the German Romantic movement, and particularly Caspar David Friedrich, as a primary source of reference, the four distinct bodies of work on view – mountain, sun, waterfall, and cloud – present a setting wherein the commonplace of the everyday gives way to the sublimity of environmental phenomena.
In formations that immediately call to mind rock spire outcroppings, or “hoodoo,” endemic to the Badlands of North America, Rondinone’s mountain sculptures consist of rocks vertically stacked on concrete plinths of varying sizes. Austere in their reference to Minimalist composition and titling, the artist mitigates severity in both the Day-Glo coloring of the boulders, as well as the deferential nod to the tradition of stone stacking, a practice seen from prehistoric dolmens to contemporary cairns. In these gestures, Rondinone extends the specificity of art history to a universality gleaned from cult objects that exist worldwide. It is this ability to meld the romanticism of the individual into the transcendence of the metaphysical that ties together all works in the exhibition.
Forever preserved in a state of precariousness, the mountain sculptures also manifest a suspension of time. This notion of temporality carries over to Rondinone’s new series of sculptures, sun. Composed of branches cast in aluminum and then gilded, the world’s oldest gauge of time is rendered static. As the exhibition’s poetic title indicates, this interior presentation of an exterior natural occurrence calls into question not only our conception of time’s passage, but also the ways in which society turns nature into artificial intervals. In the same breath, by fashioning abstracted solar forms from the branches of real-life trees, Rondinone venerates the quotidian world as nothing short of extraordinary.
Modeled by hand in clay and cast in aluminum, the spiraling waterfall works seem to simultaneously collapse downwards and expand upwards, creating a visual tension between gravity and ethereality. The cloud canvases capture a similar paradox, in which the painted abstract surface points to an infinite celestial world beyond the gallery’s walls, but the cartoon-like borders root the works in an unambiguous literalism. By rendering such incongruity through beautiful visual means, Rondinone sets the stage for an existential reflection on artificial versus natural, banal versus sublime.
Ugo Rondinone was born in 1964 in Brunnen, Switzerland and currently lives and works in New York. Rondinone has been the subject of recent solo exhibitions at institutions including: MACRO and Mercati di Traiano, Rome; The Institute of Contemporary Art, Boston; Carré d’Art, Nîmes, France; Museum Boijmans van Beuningen, Rotterdam; Museum Anahuacalli, Mexico City; Rockbund Art Museum, Shanghai; M Museum, Leuven, Belgium; Museum of Cycladic Art, Athens; Kunsthistorisches Museum Wien, Vienna; and Museum Dhondt-Dhaenens, Deurle, Belgium. This past May, Rondinone’s large-scale public work seven magic mountains opened outside Las Vegas, co-produced by the Art Production Fund and Nevada Museum of Art, and in the coming year, solo exhibitions of the artist will be held at Place Vendome, Paris; Bass Museum of Art, Miami; Contemporary Arts Center, Cincinnati; and Berkeley Art Museum in California.