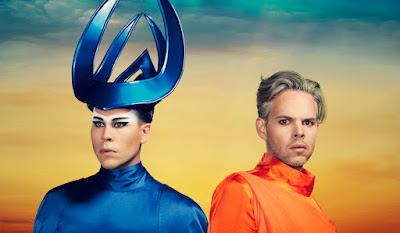 Empire Of The Sun have announced details of their new album, which is to be titled Two Vines.
The album is the duo's third and the follow-up to 2013's Ice On The Dune.
The album features contributions from Fleetwood Mac’s Lindsey Buckingham, Wendy Melvoin, who was part of Prince’s band the Revolution) and David Bowie’s Blackstar band members Henry Hey and Tim Lefebvre.

Two Vines has been produced by the band and Peter Mayes, best known for his work with The Killers and Sia.

Speaking about the album, Empire Of The Sun's Nicholas Littlemore said: "There was an image we talked about very early on with this record, before we wrote the title track, Two Vines, and that was this image of a modern city overtaken by jungle, almost like mother nature taking back the planet. All the buildings will turn back to sand. All it will be is nature again. We wanted to make something that reflected the beauty of that.”