My Chemical Romance announce details of The Black Parade reissue 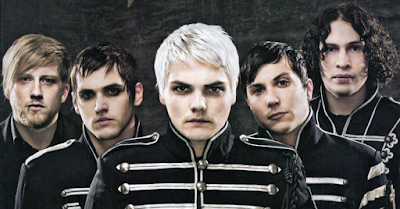 My Chemical Romance announced full details of the re-release of their all-conquering third album The Black Parade.

The album will be re-released on September 23rd and will come with a bonus disc complete with 11 never before heard demos, rarities and songs from The Black Parade recording sessions.

The re-release will be available to pre-order on hmv.com in the coming days and you can see the album's new artwork below:

The bonus will feature an early version of 'Welcome To The Black Parade', demos of album tracks 'Mama' and 'Disenchanted' and two versions of 'House of Wolves'.

As well as this it will also feature five tracks that have never been released in any form, which are titled 'Party At The End Of The World', 'My Way Home Is Through You', 'Not That Kind of Girl', 'Emily' and 'All The Angels'.

Also, available to hear now, is 'The Five of Us Are Dying', an early version of 'Welcome To The Black Parade'.

The tracklisting for The Black Parade bonus disc is as follows: