ONIRAMA band is ready to excite London with their WORLD PARTY 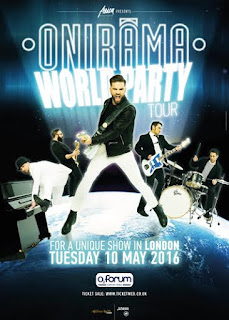 On 10th of May in 02 Forum Kentish Town, one of the most significant and historical concert halls of London, the Greek music band ONIRAMA due to the great success of their song "WORLD PARTY" (The YoLo Song) for the very first time will give abroad their unique energy proving at the same time their exceptional interaction with the audience and their fans.
The interest of ONIRAMA- one of the most popular and dynamic Greek bands- for actualizing their dream to give a live performance in Great Britain has been intense for a long time. Their live performances, platinum cds and continuous distinctions and awards gained both in Greece and Cyprus along with the MAD Cyprus Award as the best group for the year 2015 confirms some of their characteristics, which have been also attributed to them by the company research FOCUS BARI and they are the following: Authenticity-Creativity-Interaction-Positive Energy
All the above mentioned characteristics are also boosted by the positive profile of the group’s leader Theodore Marantinis who was immediately loved by the audience and was appreciated for his communicative skills, his exceptional and unique voice and endless energy on stage. This year Theodore Marantiniς is one of the judges at the X FACTOR show in Greece.

The presale of tickets has already started through the following link: o2forumkentishtown 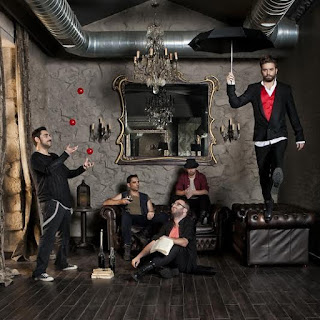 ONIRAMA with the promise that even more surprises will take place and special guest stars will also perform during the concert.
One of our special guests will be Stereo Mike who was the first MTV EMA winner in "The Best Greek Act" category and represented Greece in the Eurovision Song Contest 2011 alongside the singer Loucas Yiorkas with the song "Watch My Dance".
Another special guest will be the popular Greek composer, singer and actor PANOS MOUZOURAKIS.
The concert will open a new upcoming artist “Sma Rag Da”. At the age of just 18 years old she released her first debut album “Queen of the Surreal”.

The company ‘ATTICA ENTERTAINMENT’, who cares for the Greek audience all over the world, has been responsible for the organization and production of the concert providing anybody interested with a memorable agenda and performances of modern Greek culture, while the English speaking audience can be informed as far as the history and career of ONIRAMA are concerned in the following link/website: Atticaentertainment.com
https://www.youtube.com/watch?v=-jWABXhnDfA&feature=share
Labels: music music artist
Location: Λονδίνο, Ηνωμένο Βασίλειο