The Nice Guys at Cinema 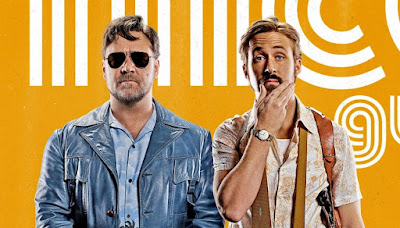 
Set against the backdrop of 1977 Los Angeles, The Nice Guys opens when single father and licensed PI Holland March (Gosling) is hired to investigate the apparent suicide of famous porn star Misty Mountains. As the trail leads him to track down a girl named Amelia (Qualley), he encounters less licensed and less hands-off private eye Jackson Healey (Russell Crowe) and his brass knuckles, both hired by the young hippie. However, the situation takes a turn for the worse when Amelia vanishes and it becomes apparent that March wasn't the only party interested. As both men are forced to team up, they'll have to take on a world filled with eccentric goons, strippers dressed as mermaids and even a possible government conspiracy.
Labels: cinema