Liz Glynn: The Myth of Singularity at Los Angeles County Museum of Art 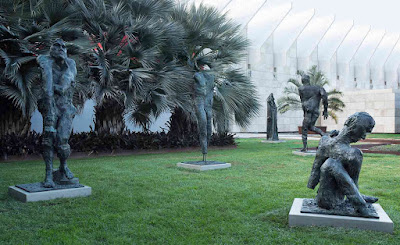 Where: Los Angeles County Museum of Art
When: Oct 31, 2015 - May 22, 2016
The Myth of Singularity (2014) is a suite of eight bronze sculptures by Los Angeles-based artist Liz Glynn, produced from plaster props generated during the performance The Myth of Singularity (after Rodin), which took place at LACMA in 2013. At that time, Glynn embarked on [de]-lusions of Grandeur, a cycle of performances that unfolded in five chapters throughout the year. Glynn conducted extensive research on the works of August Rodin, Alexander Calder, Richard Serra, David Smith and Donald Judd in our collections to respond to the process of creating, moving, and erecting large-scale sculptures, and the frequently Herculean efforts necessary to do so.


The first performance, The Myth of Singularity (after Rodin) featured Glynn working in LACMA’s B. Gerald Cantor Sculpture Garden for two consecutive days (January 19 and 20, 2013). Assisted by a group of ten sculptors, Glynn explored in this performance the process of replication, recombination, and shifts in material and scale often used by Rodin in producing works later regarded as singular acts of brilliance.
Labels: art
Location: Λος Άντζελες, Καλιφόρνια, Ηνωμένες Πολιτείες