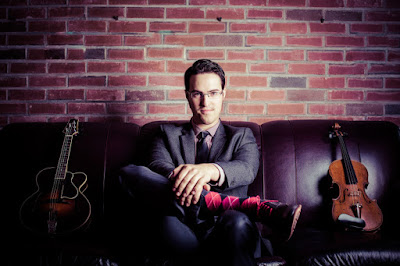 Bio
Talk to the abundantly gifted violinist and mandolin player Jason Anick and the phrase “jazz without borders” will invariably come up.  What the axiom means to Anick is a contemporary jazz that is stylistically inclusive in nature, a jazz that brings whatever it can to the party, unwilling to cut something out of the mix for fear of it not fitting prescribed boundaries. An inviting demonstration of the maxim in action can be found on Anick’s second album as a leader, Tipping Point, which has been gaining critical acclaim with praise from the prestigious Boston Globe which stated "Jason's compositional voice is as distinctive as his virtuoso playing."

One of the youngest instructors at ’s Berklee College of Music, Anick is considered “a rising star in the world of jazz violin and mandolin” (Downbeat Magazine). In addition to leading his own contemporary jazz ensemble and performing with the Rhythm Future Quartet, Anick has been touring and recording with Grammy award-winning Nashville guitar virtuoso John Jorgenson since 2008 when he was recruited while still a senior at the Hartt Conservatory.

A versatile musician and sought after side-man, Anick has also shared the stage with an array of artist like Stevie Wonder, Tommy Emmanuel, The Jim Kweskin Jug Band, John Sebastian, Delta Rae, and Girls, Guns and Glory. With performances all over the world from China, Europe, and Japan and renowned venues like the the Montreal Jazz Festival, Scullers Jazz Club, Yoshi's Jazz Club, Iridium, TD Garden, Regattabar, NPR, and The Late Night Show, Jason has proven himself to be a leader in the ever-growing contemporary string world.

Jason is also a sought-after educator, and has taught jazz violin and mandolin to students of all ages at string camps, workshops, and clinics around the world.  Jason regularly contributes educational columns to Fiddler Magazine and instructional videos to Christian Howes' .