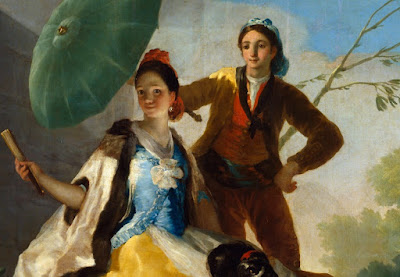 Spanish Masters at Hermitage Amsterdam
Nov 28, 2015 - May 29, 2016
The long-awaited art exhibition Spanish Masters from the Hermitage. The World of El Greco, Ribera, Zurbarán, Velázquez, Murillo & Goya opens at the Hermitage Amsterdam on Saturday 28 November 2015. The exhibition includes more than sixty superior paintings and a rich collection of graphic works and applied arts masterpieces. Never before has the Netherlands hosted such a comprehensive survey of Spanish art, with work that is hardly represented in Dutch museum collections. The exhibition features masterpieces such as The Apostles Peter and Paul (1587–92) by El Greco, Velázquez’s Portrait of the Count Duke of Olivares (c. 1638), Murillo’s Immaculate Conception (c. 1680) and Goya’s Portrait of the Actress Antonia Zárate (1810–11), in addition to paintings by their pupils and later painters, up and including Picasso. Together they tell the story of the rise and glory of Spanish art in the Golden Age, which would continue to influence art into modern times.
The Golden Age of Spanish painting began in the late sixteenth century and flourished throughout the seventeenth century, coinciding with the Dutch Golden Age. While the Netherlands was revolting against Spanish rule, Spain was developing its own artistic signature. Philip II, an absolute monarch in a society dominated by the Catholic Church, commissioned the construction of El Escorial in 1563. The enormous palace and monastery complex near Madrid was decorated by great Spanish and Italian masters. Spain’s unimaginable wealth, amassed largely during the country’s period of colonial gold fever – Spain called itself ‘the Empire on which the sun never sets’ – brought painters abundant commissions for the king, churches and private collectors. Spanish art flourished.
The works of the great Spanish painters are exceptional for their exquisite convergence of the spiritual and the theatrical. Influenced by the Italians, painters like El Greco, Ribera and Zurbarán developed a singular Spanish style marked by strong contrasts of light and dark. Their works exude the temperament and pride of the Iberian Peninsula. Murillo and in particular Velázquez, a trendsetter, added their own signature to that style and reached new heights. Goya, an equally awe-inspiring talent, followed in their footsteps with his confrontational realism. Goya is also famous for his penetrating graphic cycles and a number of his dramatic etchings are featured in the exhibition, including pieces from Los Desastres de la Guerra, depicting the horrors of the Napoleonic occupation of Spain. The artists of the nineteenth and twentieth centuries continued the tradition, rendering the strong contrasts in society in works that reflect both the sun-drenched Spanish culture and the dark sides of history.


Spanish art is a unique chapter in art history. From 28 November 2015 to 29 May 2016, this compelling story will be illuminated by over a hundred superior works from the Hermitage in St Petersburg, which has the largest and most diverse collection of Spanish art outside Spain.
Labels: art artist painting
Location: Άμστερνταμ, Ολλανδία