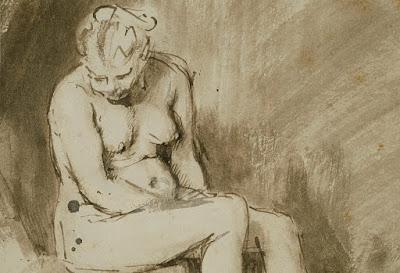 Where: Museum Het Rembrandthuis
When: Feb 12, 2016 - May 16, 2016
From 12 February to 16 May the Rembrandt House Museum is staging an exhibition about drawing nude models in Rembrandt’s time. Based on new research, Rembrandt’s Naked Truth features seventeenth-century nude studies that have never before been brought together in such large numbers. It will be the first time that Rembrandt’s frank approach to drawing nudes will be examined in depth and brought to the notice of a wide audience.
In the seventeenth century Rembrandt and his pupils followed the new trend of drawing from models, but Rembrandt’s approach differed from his contemporaries’. His uncompromising realism was criticized – he presented reality and so did not conform to the accepted ideal of beauty at that time. When Rembrandt and his pupils drew nude models they talked about art, beauty and transience – subjects that were as sensitive in those days as they are now.


Rembrandt’s Naked Truth will showcase more than fifty objects from a number of European and American public and private collections, augmented by a selection of Rembrandt’s etchings from the Rembrandt House’s collection. The drawings, prints and paintings are extremely rare.
Labels: art